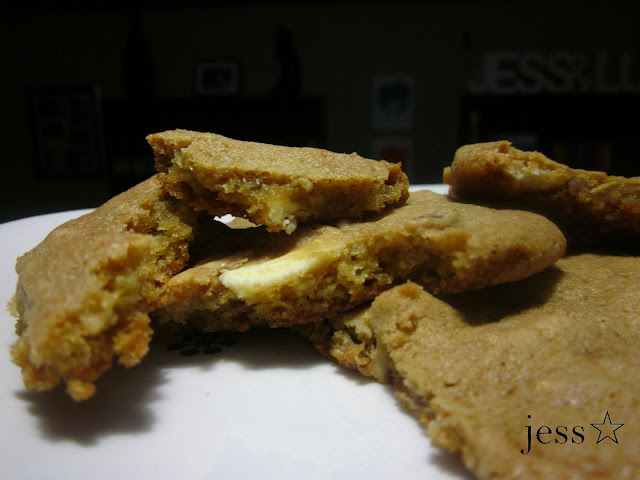 Sous-Jeff is a good man. He puts up with my constant baking and attempts to make him fat, my crash diets to lose the few kilos I put on while going through my crazy baking phases, my semi-attentiveness while he's speaking as I flick through a recipe book, and my insistence that he goes and grabs just one egg from his mum's fridge because I need one right now to finish these cupcakes! He's very patient, and very kind when it comes to my baking and cooking exploits. He'll try anything once, and is full of nothing but praise and admiration for my creations. He manages to make even the most pedestrian of my dishes sound like a Michelin-Star plate. He even cooks a little himself, but mostly just the standards like pasta and Mexican (he makes fantastic Mexican food!).

So, you can imagine my excitement when, curled up on the couch watching Master Chef a few nights ago, he says "I want to bake something for you. A cake or cookies or something. Coz you always make amazing desserts for me, and I want to try and do something for you." Wow... I feel super special and super proud that I've inspired him to try his hand at some baking! 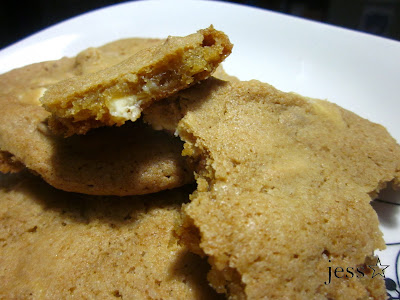 Sweeter still, he admits he has no idea where to even start with baking a batch of cookies - he doesn't know what half the ingredients are or what they look like either. He's picked out a recipe and shows it to me, and asks me to give him a "cookie master class" - no physical help, no touching the mixture, no pulling ingredients off shelves, just verbal instructions. As much as I adore my husband, he's about as delicate as the proverbial bull in the china shop. He's a big, strong, athletic, footballer of a man, not a delicate pastry chef. But I'm so excited that he wants to give it a try that I don't care about the potential kitchen mess that's about to happen!


He's chosen a recipe from the Mrs Fields Best Ever Cookie Book, for a batch of Nutty White Chunk Cookies, and they're re-created with a few alterations given that we don't have all of the ingredients listed. Here's what went down...

Because men aren't fabulous multi-taskers, I take the role of "recipe reader" and begin reciting the steps to Sous-Jeff. First, preheat oven to 160°C and line a baking tray with paper.


Now, grab the plain flour (no, that's self-raising, the other tub. Yup.) and measure it out. Ok, pop it in a bowl and add in the bicarb soda (not the icing sugar. Yes I know they look the same).


Grab a large bowl and put in there the butter and sugars. Beat well with an electric mixer to form a grainy paste. Next, add the eggs and vanilla, beating at a medium speed until light and fluffy.


Drop rounded tablespoons onto the tray with approx 3cm gap between, as they will flatten and spread out considerably. Bake for 20 minutes, or until just beginning to turn golden brown.


Sous-Jeff pops them in the oven, carrying the kitchen timer back to the couch with him while he anxiously awaits the cookies to bake. 20 minutes later, out they come, and they smell delicious. We wait the mandatory few minutes before carefully transferring them to a wire rack to cool. 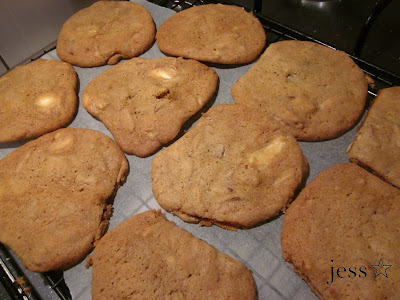 Nothing can wipe the smile off Sous-Jeff's face, and I couldn't be prouder (or hungrier!) - it's his first batch of un-aided cookies! And they taste fantastic! We wolf them down pretty quickly; before they all get eaten, I make sure I pack one for my lunch the next day.They're soft and squishy, and the toasted almonds contrast magnificently with the sweetness of the chocolate. Sous-Jeff is already thinking of more chocolate/nut combinations for another batch - it seems that my enthusiasm in the kitchen is finally rubbing off on him! And I can't wait till his next kitchen adventure! 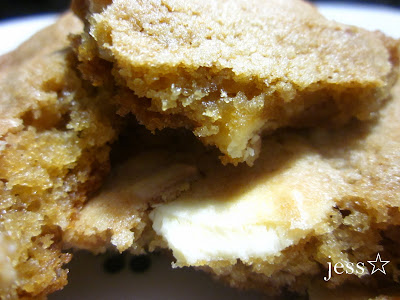