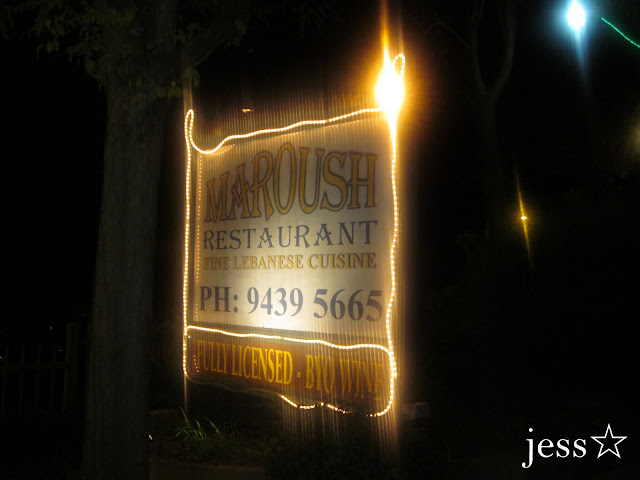 With the plethora of delicious and diverse cuisines available it the Melbourne CBD and surrounds, it's so easy to forget about your own backyard. Which is exactly what Sous-Jeff and I have done. There's this restaurant that we drive past a dozen times a week, which we've been invited to for dinner before but didn't make it, that we're um-ed and ahh-ed over for years - you know that restaurant? We all have one. Maroush was ours. Until Saturday night - we decided to finally give it a shot. We decided to book a table, just in case, even though we didn't think it'd be all that busy, because it was just a local little restaurant. Wrong. It was darn lucky we did book, because it was packed! The car park was full when we arrived at 7pm, with the 50m either side of the restaurant lined with parked cars too. Awesome, we think, it must be good it it's this busy! 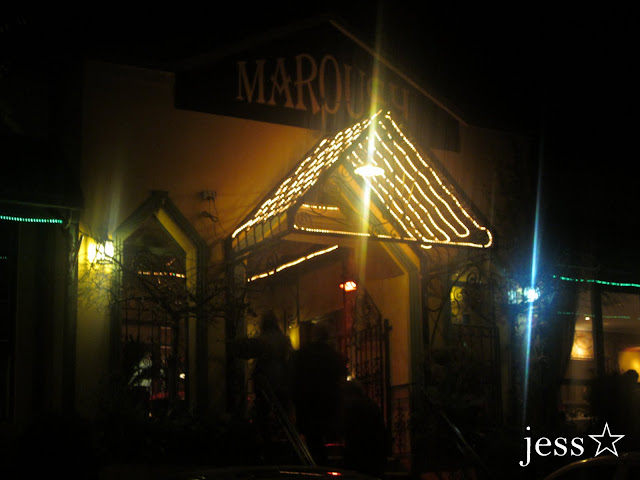 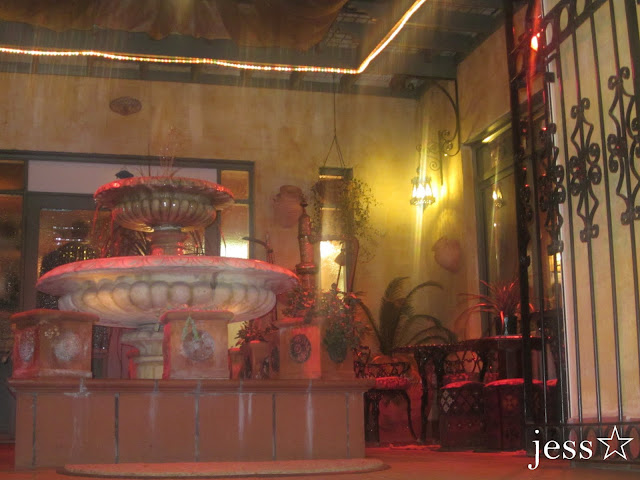 We ascend the tiled steps and make our way through the big, wrought iron gates, and past a big, terracotta coin fountain. We make our way through the front door and almost walk into the front counter/kitchen area. The restaurant is divided into two seemingly identical sections, one to the right of the kitchen, the other to the left. We are led around to the right hand side, and seated on a table below some beautiful, huge, golden engraved discs. 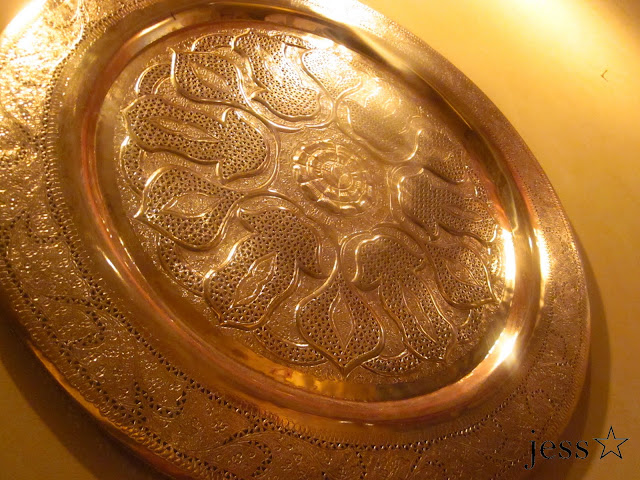 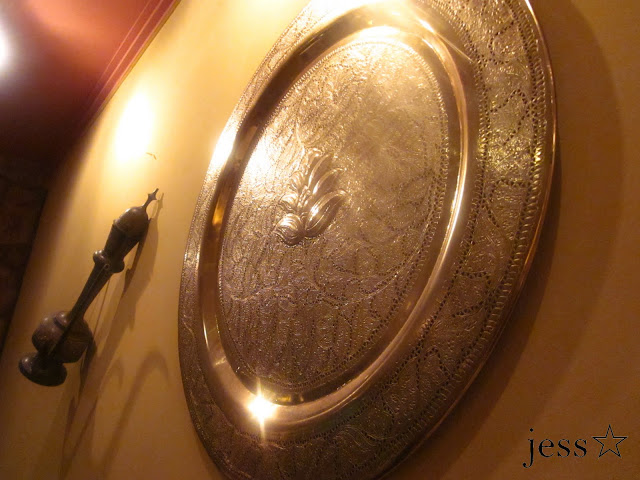 Directly opposite us is a large mirror, framed with Lebanese knick knacks and a painted mural on the wall behind my seat. 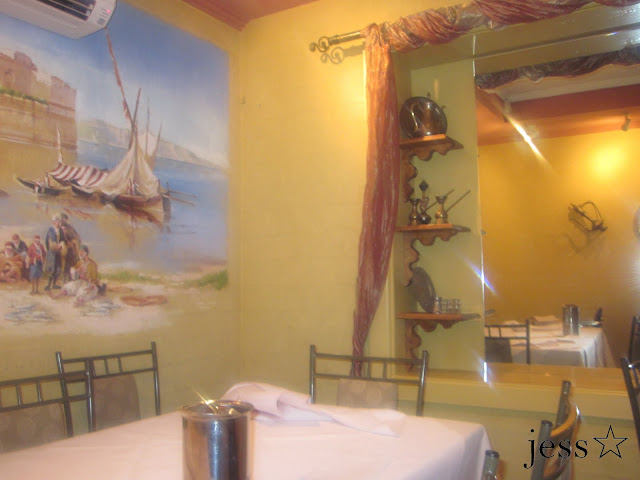 But enough of the view, time for the food! Neither Sous-Jeff or I had eaten Lebanese before, and were a little scared of what the food might be like... we really, honestly had no idea what to expect! So, what better way to try it than to go with the banquet?! The lovely waitress we had was fantastic - she knew the menu like the back of her hand and explained every dish (all 14 of them!) succinctly and simply.
First out for our entrees was a trio of dips with warm pita bread and also fried pita bread. 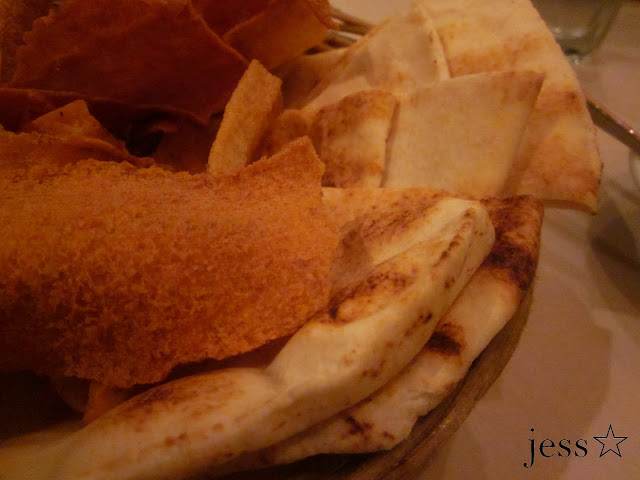 We had Hommos, which was nutty, meaty, grainy and earthy - it tasted like real chickpeas, and was absolutely perfect!
Baba Ghannouj, which was perfectly silky smooth, and had the most beautiful smokey flavour which was perfectly married with the eggplant.
Lastly in our trio was the tabouli - lemony and zesty, perfect to refresh our mouths in between what was to come!
Next out were the falafels, a spicy mix of beans, vegetables and herbs, made in meatball form (which were just a little too spicy for me!) with a beautifully smooth tahini sauce which had a great lemon flavour. Unfortunately, there was one grumpy waiter in the whole place, and he happened to be the one who brought out this dish to us, plonked silently and unceremoniously on the table, and off he stomped to the next customers. Sous-Jeff loved the falafels, being the spice fiend he is, and was surprised that a vegetarian, gluten free dish was so delicious! 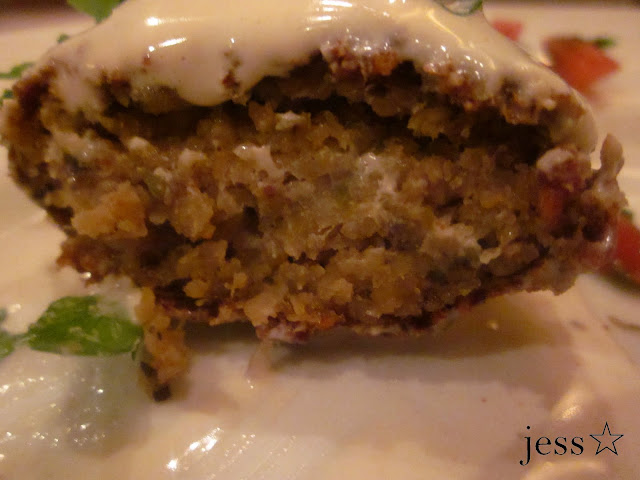 Next out were the meat cigars; spiced, lean lamb and pine nuts, wrapped in filo pastry, with a sweet, syrupy, unknown sauce on top. Thankfully, the lovely waiter who brought these out to us was more than happy to explain what everything was when we questioned what the previously mentioned falafels were. He said it was fantastic that we wanted to know more about our dishes, as it showed that we were excited about the food - very true. He happily explained what the meat cigars and the falafels were, and to the credit of the staff, the waiter and waitress we had for the remainder of the evening enthusiastically explained each following dish to us with a great big smile on their faces. I loved these little cigars, and was was relieved to find they actually weren't spicy at all! I think "spiced" means "herbed" or "flavoured with spices," not actually hot and spicy! I'm not sure what the sauce was, but it didn't seem to really go with the cigars... it was tasty, but it just wasn't quite right. 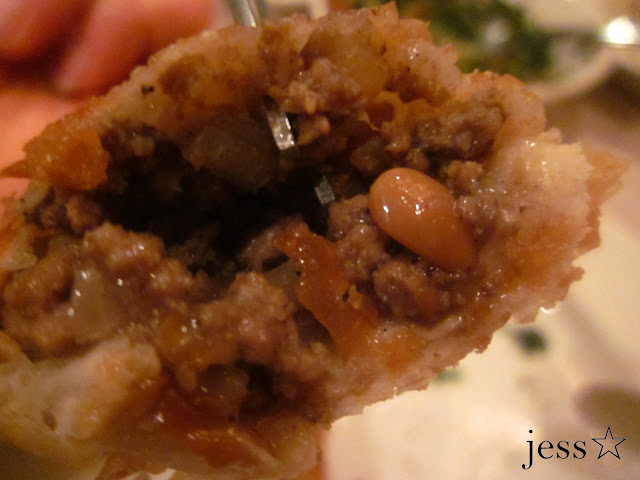 Along with the meat cigars came with Sambousik - fetta cheese with onion and mixed herbs, wrapped in filo pastry again. This was one of my favourites, I loved the creaminess of the fetta, which wasn't overly salty, contrasted with the perfectly crisp pastry. 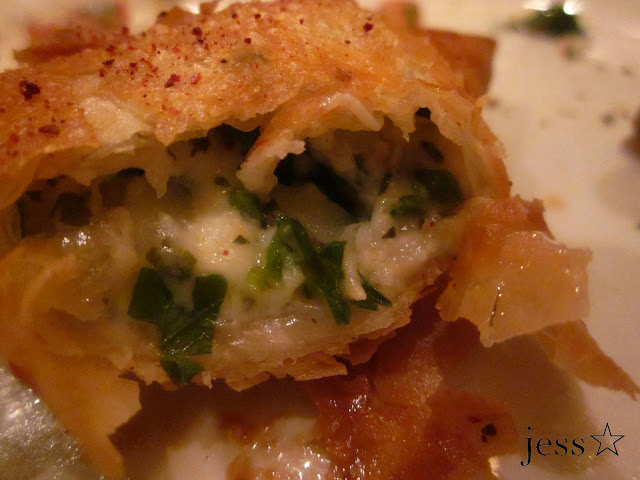 Then, out comes the Makanek, which are grilled lamb sausages with lemon juice and sumac, which were very tender and tasty. 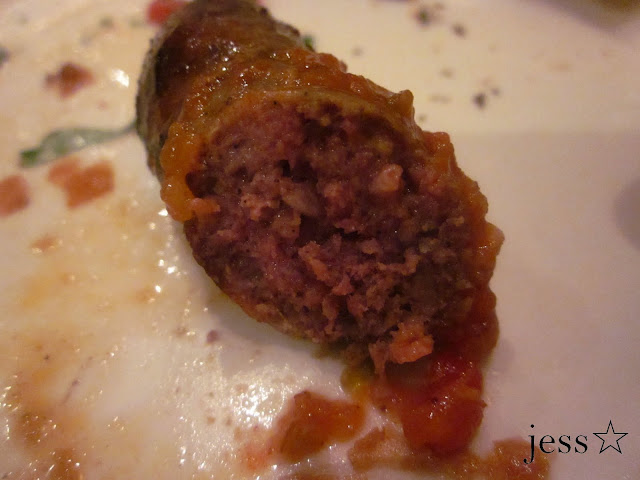 And they were followed by the Ors Kafta - grilled lamb patties with onion and fresh parsley. They were perfectly cooked and tasted beautiful with fresh lemon squeezed over them.


With our entrees done (yes, all of that was just the entrees!), the waitress clears out table and tells us she'll give us a few minutes to digest before bringing out our mains. We nod appreciatively. 10 minutes or so later, out come the mains. It's a smaller version of the standard sized main (thankfully!), and we get a beautiful platter of Shish Tawook and Shish Kabab on different rices, and a little side of salad with a garlic and lemon dressing.

We tried the Shish Kabab first, which was the marinated lamb on skewers, served on a saffron rice. I must admit, I'm not really a lamb eater (hence why we went for the lamb first) and was quite apprehensive at the sight of the menu with all of the lamb... but it was all cooked magnificently and I probably would eat lamb more often if it was always done so well! It was very soft and tender, and the saffron rice was beautifully flavoured - they went together so well that I left my last few bites of rice and lamb to eat after the chicken (I like to finish on a high note!). 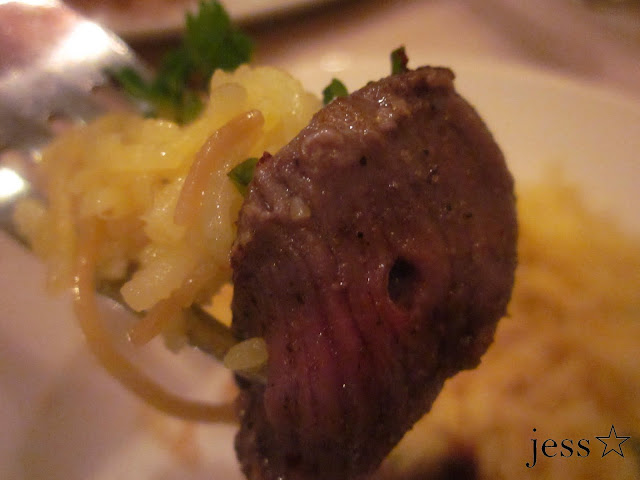 We tried the chicken next, the Shish Tawook (marinated in garlic and lemon juice), and it was also very soft and tender, but, and I can't believe I'm typing this, but I actually enjoyed the lamb more! I wasn't a fan of the almond rice as it was laced with cinnamon (and I'm just not a fan of cinnamon), but Sous-Jeff quite enjoyed it. 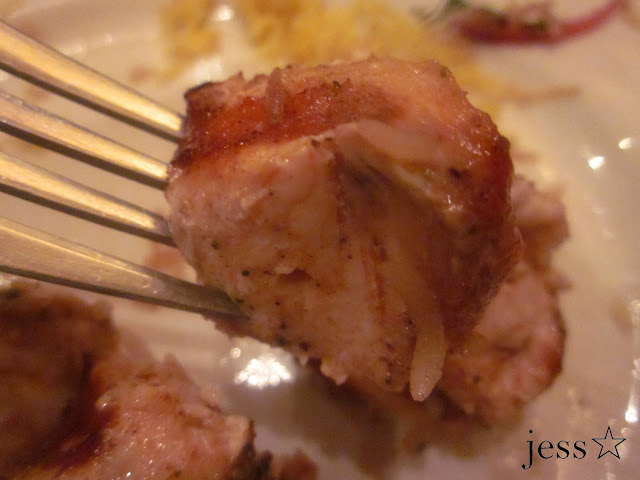 With our mains finished and bellies full, our plates were once again cleared and we were given another 10 minute reprieve, before dessert was served. We were given a small platter of Turkish Delight, Baklava and Mahalabia. Neither Sous-Jeff nor I are particularly fond of Turkish Delight, but in the name of trying anything once, we give it a crack. It's ok, but not really our cup of tea, so hard to say how good it was, sorry!


The Mahalabia was a traditional Lebanese custard, topped with honey syrup, pistachios and blossom water. The first flavour to hit my taste buds was the lavendar flavour of the blossom water, which was incredibly sweet. The custard itself was beautiful, and reminded me a little of panna cotta. Sous-Jeff absolutely loved this, and actually ate half of mine. I traded him for his bit of baklava.


I've saved the best (in my opinion, anyway!) until last. I've never had Lebanese Baklava before, and was a little worried that they may have snuck some cinnamon in it, which would have rendered it uneatable for me... but alas, my dessert prayers were answered, and it was absolutely perfection. Layers of crispy, golden filo pastry with assorted crushed nuts and the most beautifully sweet honey syrup. The flavours were perfectly balanced and it was absolutely magnificent. I begged Sous-Jeff to let me buy a $5.00 take away/take home pack, but to no avail. Will definitely be going back for some more soon though! 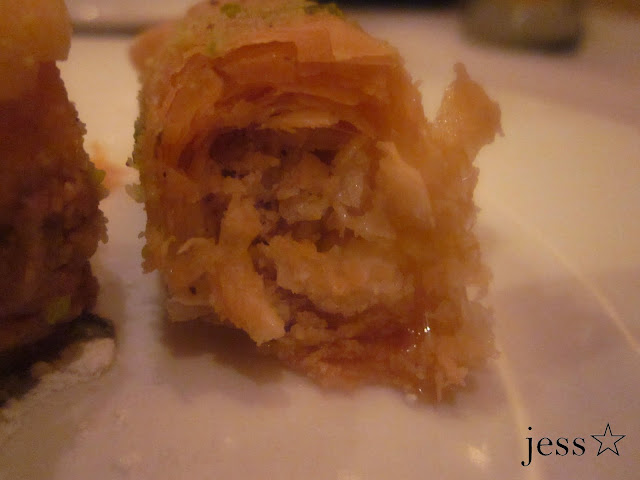 With dessert eaten, we shuffled out of our seats, barely able to move we were so full. That enormous banquet came to a total cost of $42.00 each, which we felt was absolutely fantastic value for money. The food was all beautifully prepared and very delicious. We were very pleasantly surprised after initially going in quite hesitant, and we certainly plan on dining there again. Unfortunately, we were met with the grumpy waiter on our way out, but other than that, the staff were friendly and well organised and efficient, considering how busy they were.


How many of you have gone into a dining experience full of hesitation, only to be very pleasantly surprised?