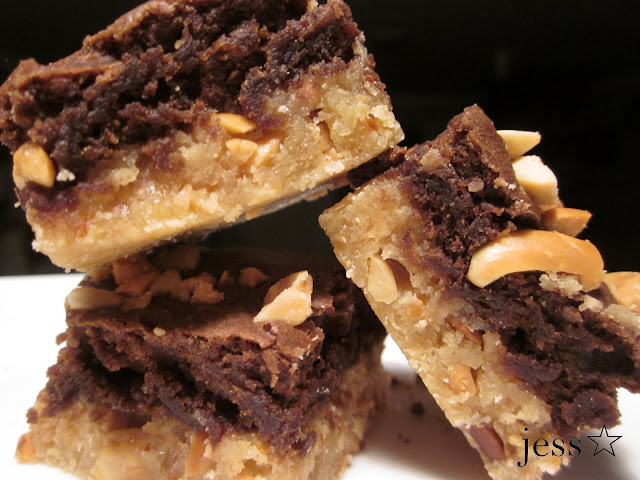 Confession: I looooove looking at dessert blogs. I know I can't possibly bake everything I see, because I'd eat it all and then weigh 200kg, and that's just not safe. But I still love to look. Page after page, cake after cake, cookie after cookie. Usually, my self control is pretty good (mostly due to the fact that I don't have half the ingredients needed to bake the beautiful recipes I see, thank goodness!), but alas, last week, my will power failed me. 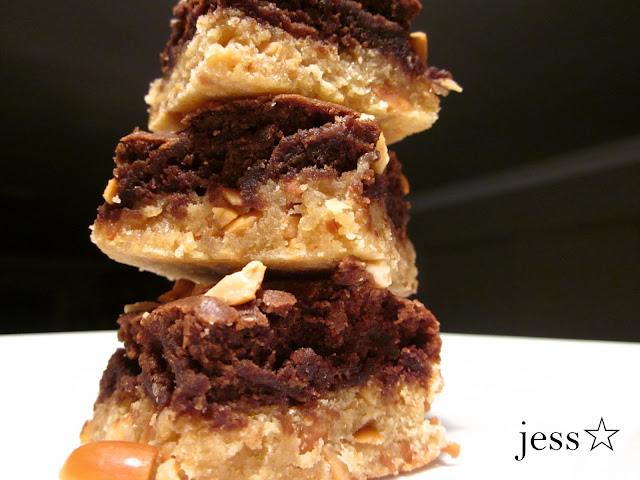 I both thank and curse Anna from Cookie Madness for derailing my attempts to take a week off eating sugar-laden delights. I was doing pretty well until I saw her recipe for Macadamia White Chunk Brownies - a delectable combination of cookie and cake. I had to have them. Immediately, if not sooner. I didn't have the same pantry of ingredients to work with as Anna, but that was fine with me because I'd planned to recreate these tasty morsels in my own way - with a peanut cookie base and chocolate fudge cupcake on top! With Kitchen Bug by my side and tub of flour in my hand, I pre-heated the over and here's what ensued...

Before you get started, pre-heat the oven to 180°C, get out all of your ingredients (listed as follows), and line a 22cm square cake tin with baking paper. The cookie dough comes first: I had no recipe for this, just my imagination and a mish mash of recipes I'd previously used from 1 Dough, 100 Cookies. To re-create, you'll need:
Put the butter and sugars in a bowl and mix with a wooden spoon, then beat in the egg with an electric hand mixer, then the vanilla. Sift the flour into the mixture and stir until combined. Lastly, add in the crushed toasted peanuts and stir until combined. 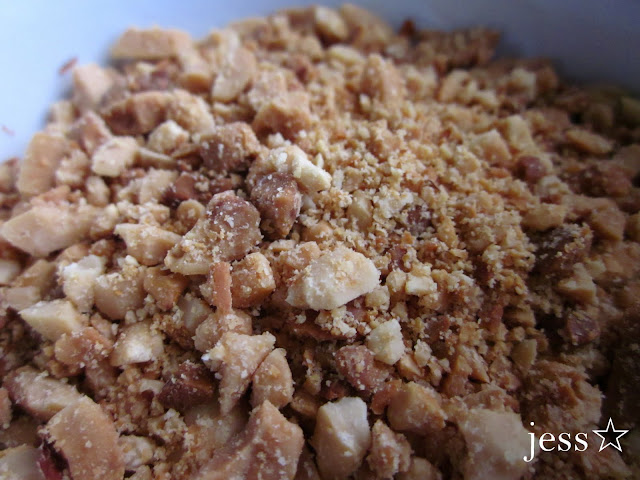 Leave that mixture for now - we're coming back to it soon!


Next up, I get started on the cake mix - the chocolate fudge cupcake mixture from The Cupcake Book. You'll need:
Heat the butter, water, sugar and golden syrup in a small saucepan over medium heat, stirring constantly until melted and smooth. Bring the mixture to the boil, then reduce the heat and cook 5 minutes. 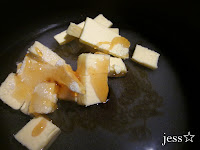 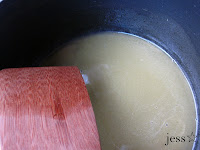 Remove from the heat and allow the mixture to cool. While you're waiting for it to cool, take the cookie batter and press it into the prepared cake tin and set aside. 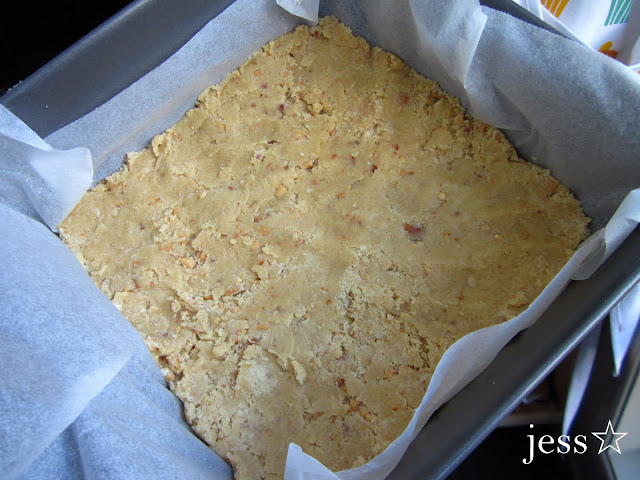 Back to the cake - sift the flour and cocoa into a large bowl. Then, mix the vanilla, milk and bicarb in a small bowl until the bicarb has dissolved. Alternately pour the milk mixture and the melted butter mixture into the flour and cocoa mix, beating will with electric beaters in between each addition, until it's nice and shiny and delicious looking. Don't worry if it looks a little bit lumpy - totally normal and will end up just fine! 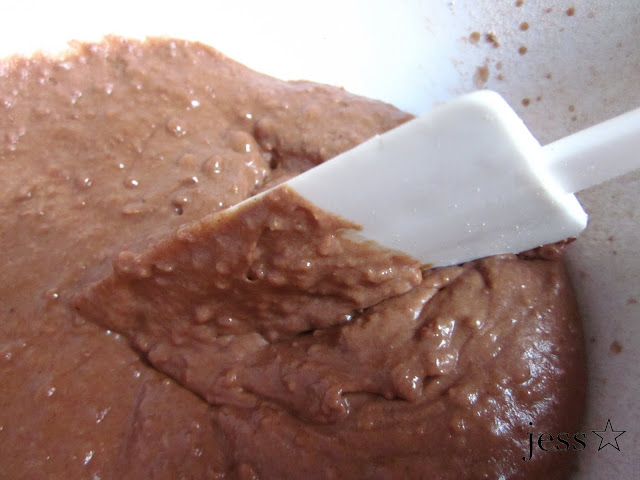 Now for the fun part - Pour the cupcake batter on top of the cookie dough! The Kitchen Bug crosses his paws at this part and prays to the powers that be that something, anything, falls to the floor for him to lick up. No such luck, buddy! 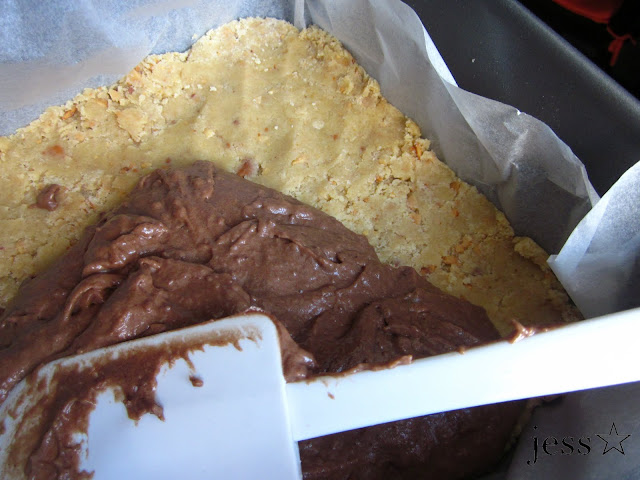 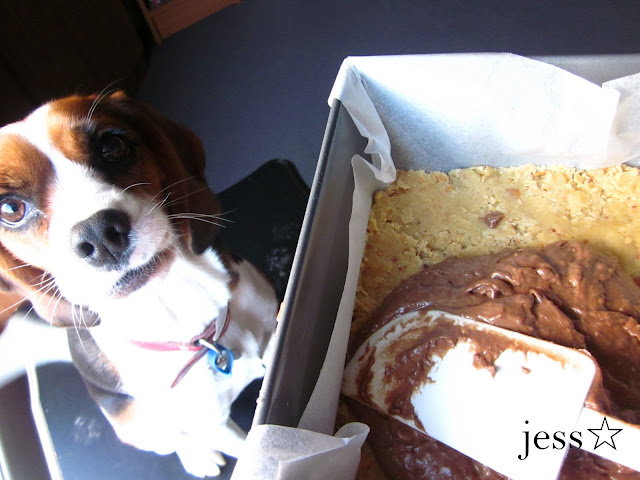 Before it goes into the oven, sprinkle that last bit of crushed peanuts over the top - yummy! 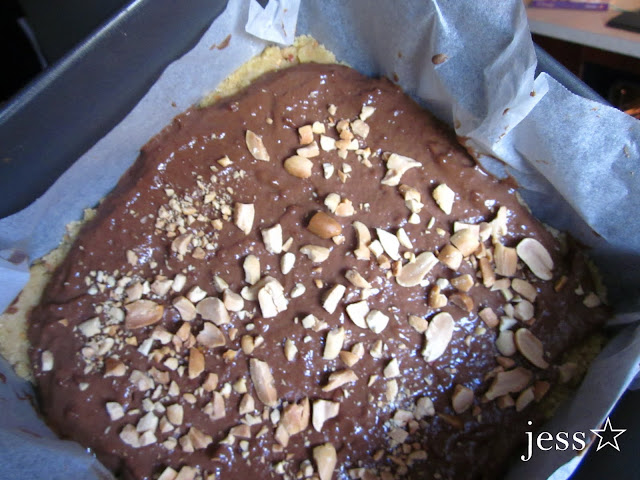 Around about 18 minutes later, out comes the cake tin of goodness. Let the cake/cookie sit in the tin for 5- 10min before taking it out to cool on a wire rack. 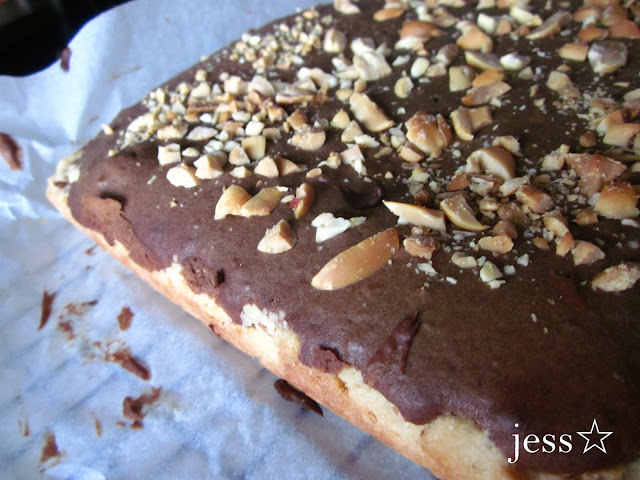 Once it's cool enough to touch, whip out the knife and slice this bad boy open! Tastes great warm and cooled down, so you might as well try a little bit before it cools! 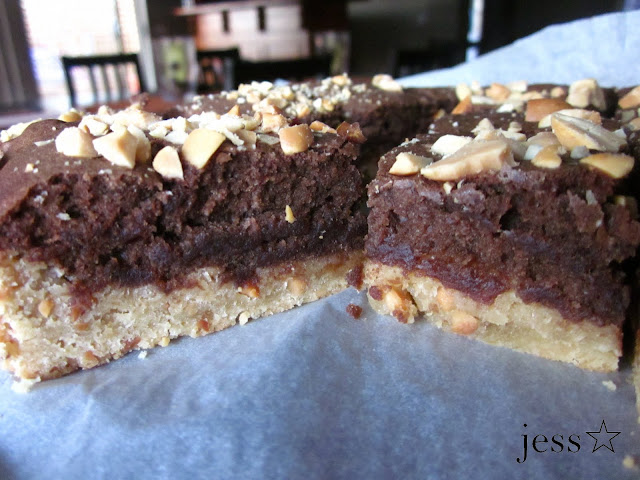 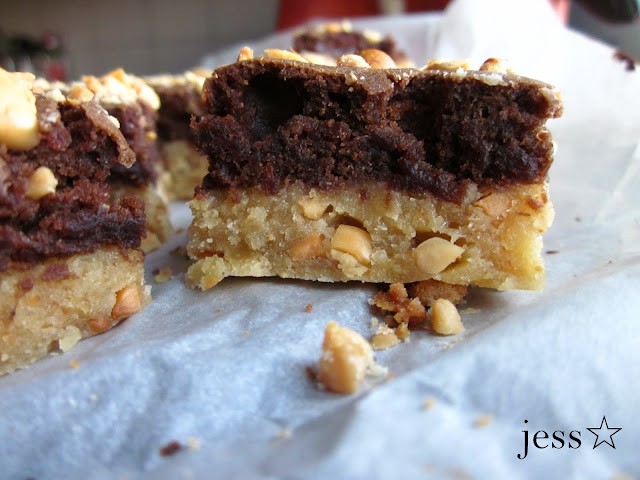 It probably could have baked for another 3 or 4 minutes, as the cookie base was still quite soft, however I prefer my cookies slightly under cooked, so it was perfect for me! Next time I make it though, I'll probably make a little more cake mix, as I'd have preferred a thicker cake topping, but the cake itself was very soft and delicate, not super thick like you might expect a "fudge" cake to taste. 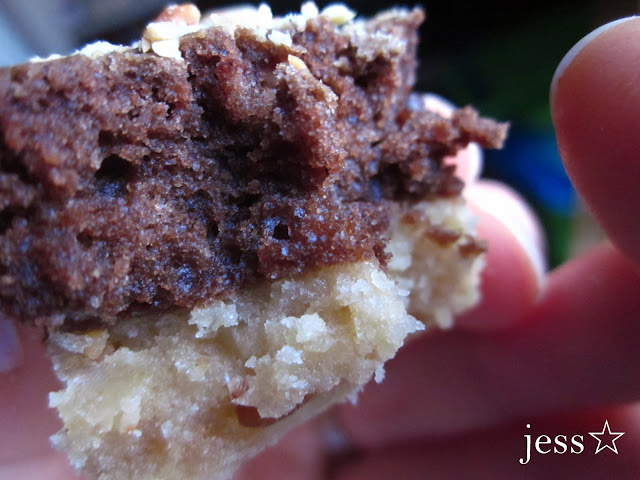 All in all, very happy with this experiment - just wish I'd made more! See, in the misguided justification of making it not as unhealthy, I took half the batch straight over (literally, still warm!) to Sous-Jeff's family's home so I wouldn't be tempted later... 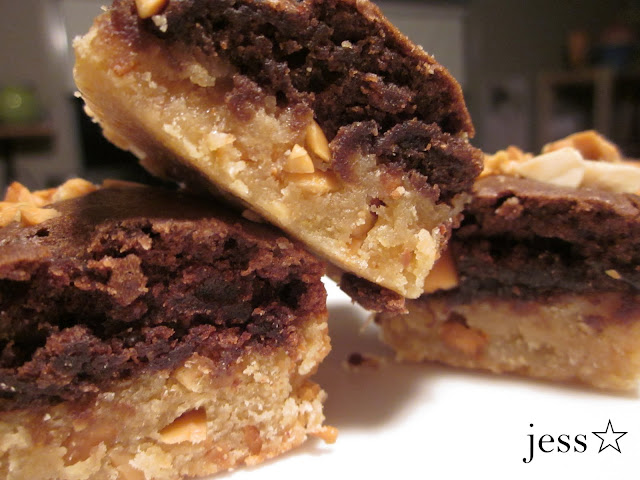 ... luckily, because Sous-Jeff and I polished off our half a batch within 2 hours. Will definitely need to make these again! How about everyone else??! Any recipes you've seen on other blogs and thought "I MUST make these!"?? 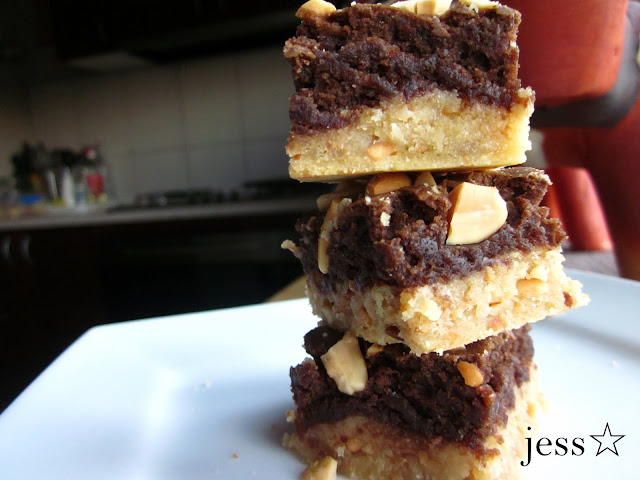