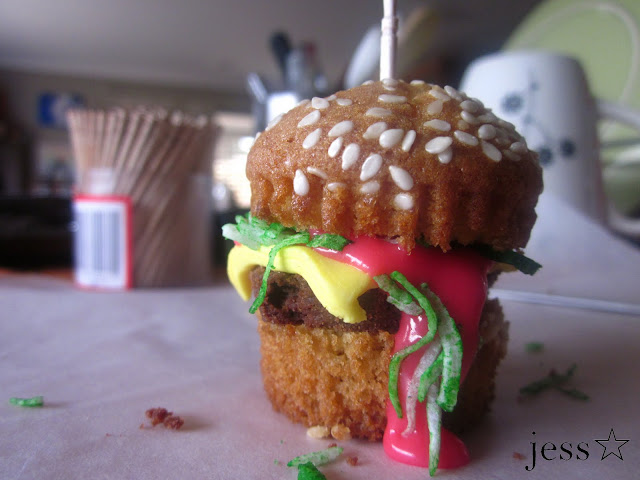 Two words I bet you never thought you'd hear together. Hamburger cupcakes. Random enough to get your attention? Thought so!

I found a picture of these around 3 years ago, after Googling "cute cupcakes," wanting to find a super cute picture to email to a friend who was having a bad day. What I found, in amongst the fairy-and-pink-polka-dotted cakes, was a picture of what looked like a hamburger, but apparently made from far sweeter ingredients. I was intrigued, and clicked on the picture, hoping for a recipe or instructions, or more information at least! What I got was a bigger version of the picture. 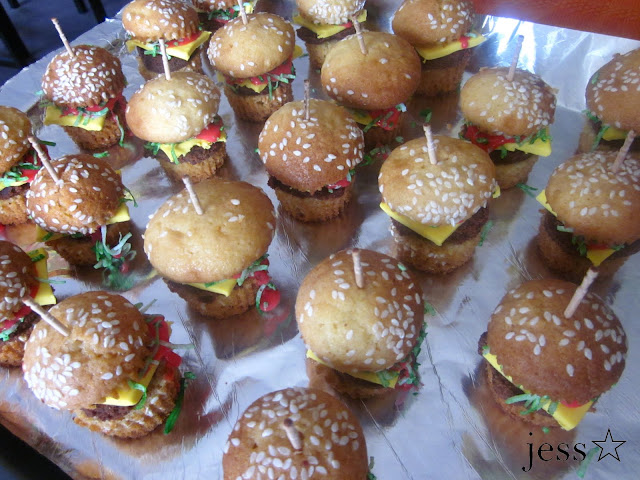 I printed out an A4 sized copy of the cute little picture, took it home, and resolved to re-create them for myself. That weekend, I did exactly that, for my cousin's birthday dinner with the family (he was turning 18 by the way...), and have since re-created it in a giant cake size for another cousin's 13th birthday two weeks later, and then again now so long ago for a work colleague's son's birthday! Talk about a popular cake! 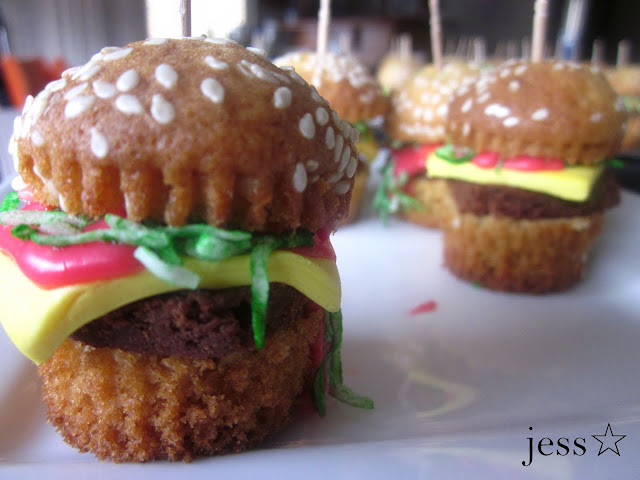 Anyway, how they came about again - we're holding a cake-and-cookie stall at work at the moment to raise funds for the YMCA's Open Doors charity - a gold coin donation will get you one of the lovely baked goods kindly made and donated by the staff at our branch. A colleague of mine made some awfully cute bumblebee cupcakes, and I decided I would not be defeated by them. So it was time to pull out the big guns. It was hamburger cupcake time.

They look a lot more complicated than they actually are, and they're the product of a little bit of trial and error, seeing as I didn't actually have a recipe to follow originally. But I improvised, and here's what I came up with...

First, for the "burger buns," bake a batch of standard vanilla cupcakes, in mini cupcake cases instead of standard size, and sprinkle the tops with sesame seeds before baking them. 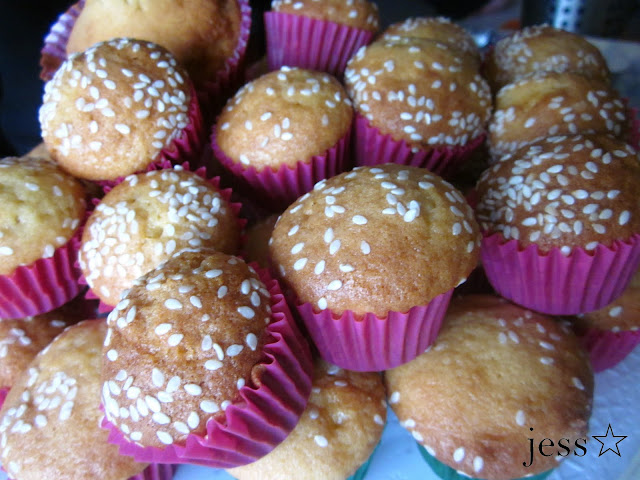 For the "patties," I made up a batch of chocolate cookie dough, and spread it over a baking tray as one giant rectangular cookie. Once it was baked and cooled, I used a shot glass as a size stencil and cut around that very carefully with a sharp knife to create the little round patties. 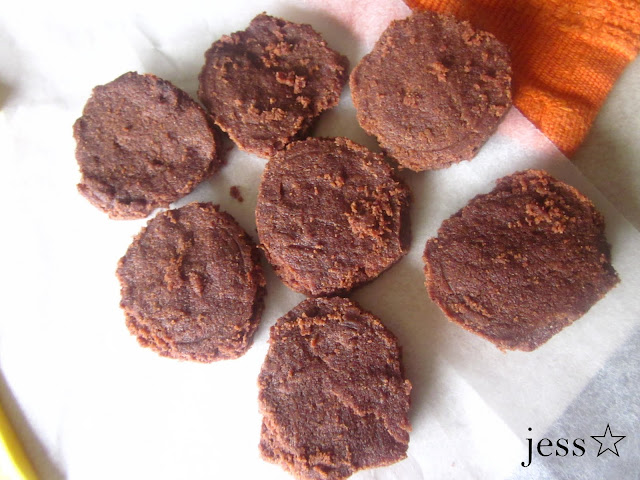 For the lettuce, I put some shredded coconut into a snap lock bag with a few drops of green food dye, and shook it around until all the coconut was coloured. 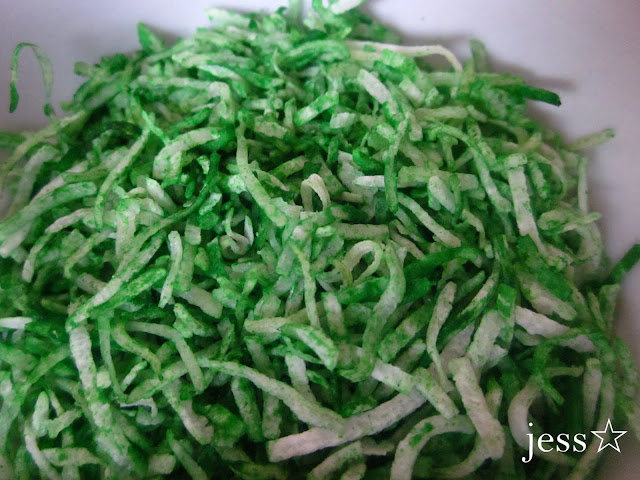 The tomato sauce was just icing sugar mixed with a few drops of red food colouring and a bit of water. 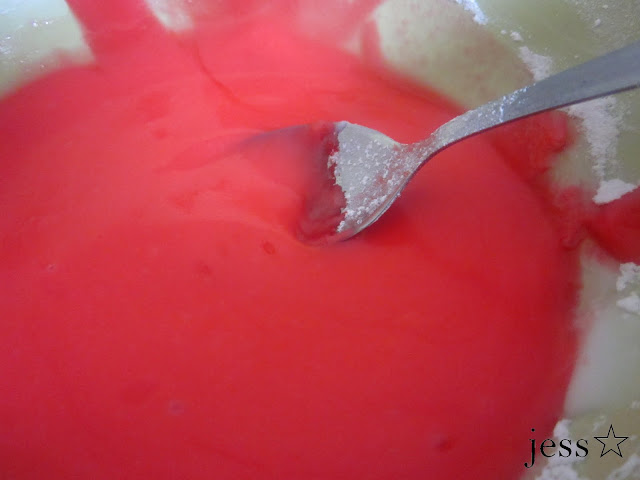 And the cheese was some royal icing dyed with yellow food colouring. Once it's been coloured, roll it out between two pieces of baking paper. 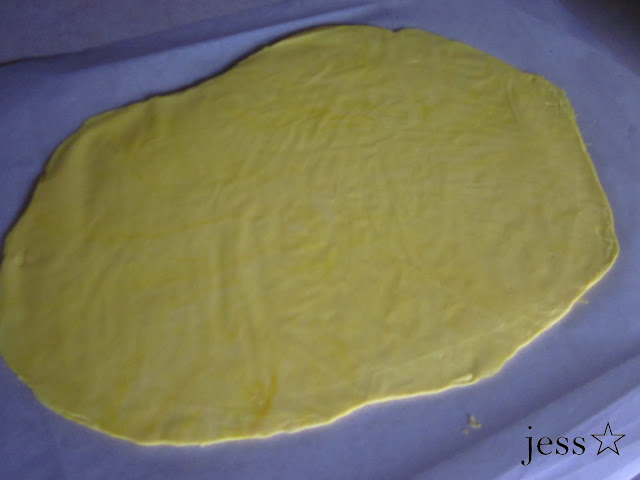 Now, to put them together...


First up, peel the cupcake cases off the cakes, and slice them in half (top and bottom). 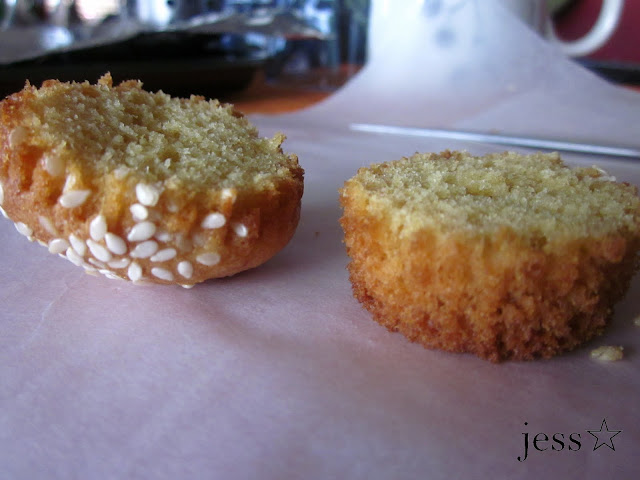 Then place one of the chocolate cookie patties onto the bottom half of the cupcake bun. 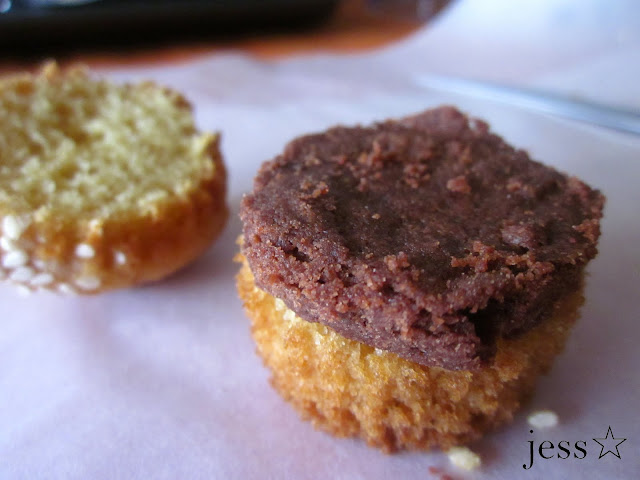 On with the cheese next! Slice it up into squares that will fit on top of the cookie pattie and hang over the edges a little. The easiest way to get the slices off the paper is by sliding a super sharp knife under the square and carefully sliding it off. 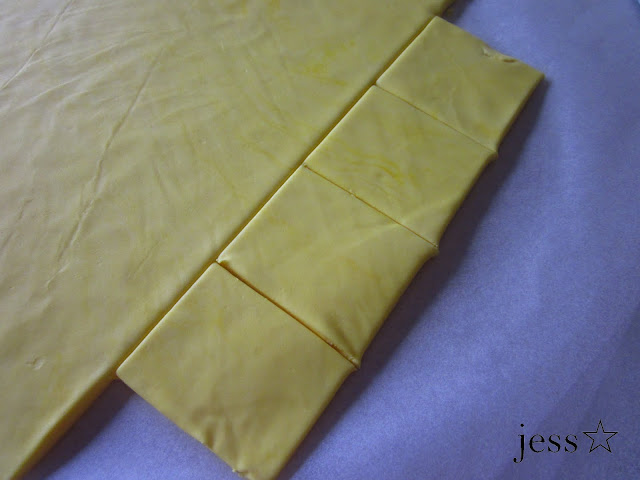 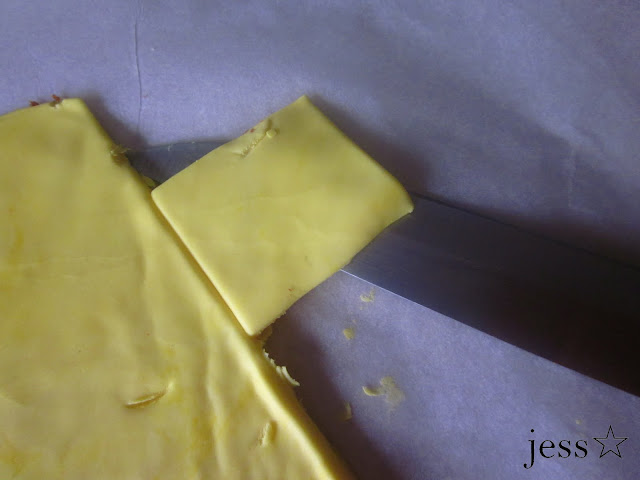 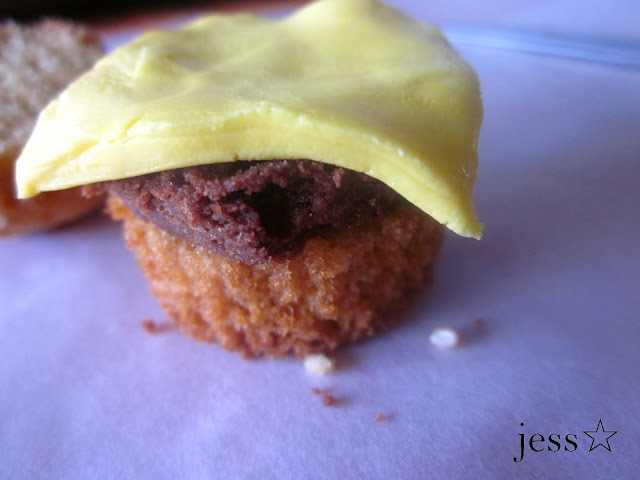 With a teaspoon, carefully spoon a small amount of the red icing "sauce" in the middle of the "cheese" - don't worry about pushing it down the sides, it'll drip once you put the top of the bun on and toothpick it all together. 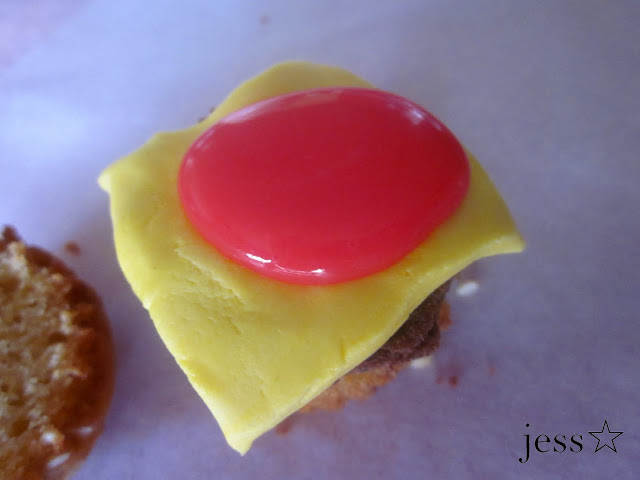 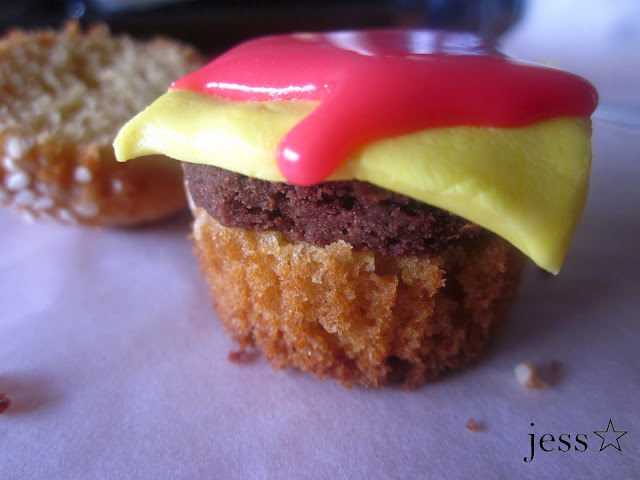 Sprinkle a bit of coconut "lettuce" on top... 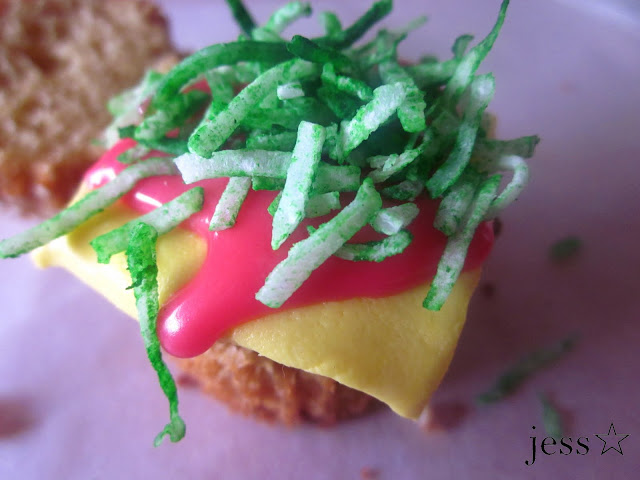 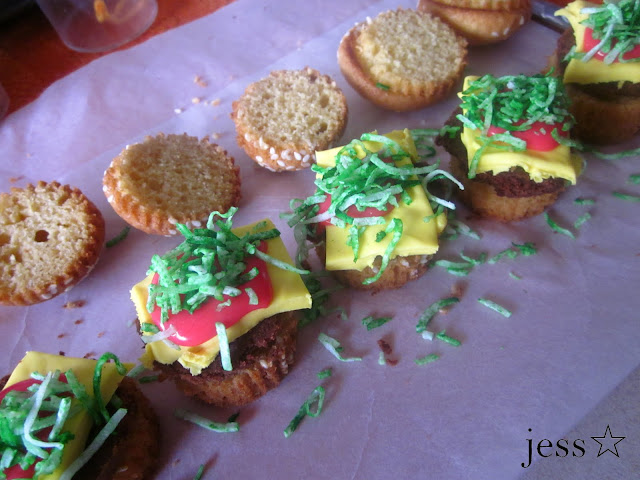 ... put the lid on, and pop a toothpick through the burger, and you're done! 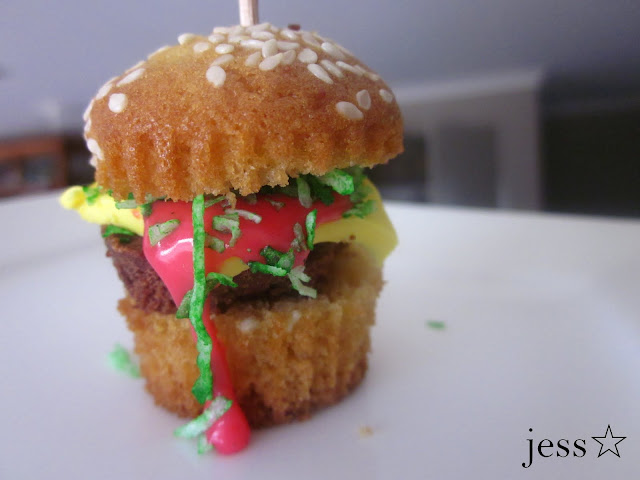 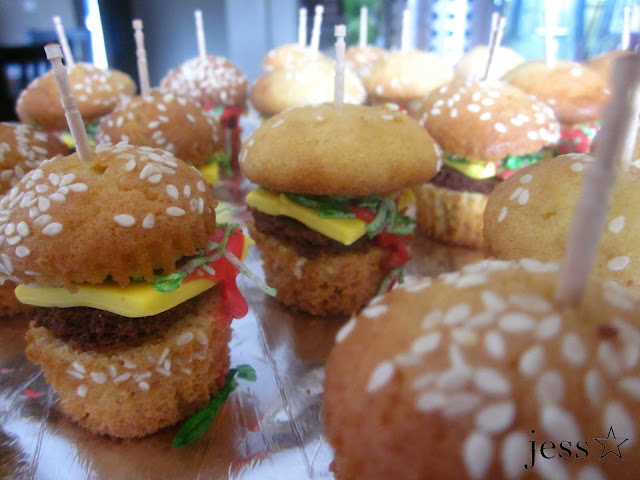 These burgers might only be little, but they pack a huge punch! They're pretty cute, and the combo of cake, cookie, icing and coconut all in one is a sugar lovers dream! And the kids passing by the stall at work seem to have liked them too, judging by the fact that 24 hours after I dropped 2 dozen of them off, there were only 2 left! Success! 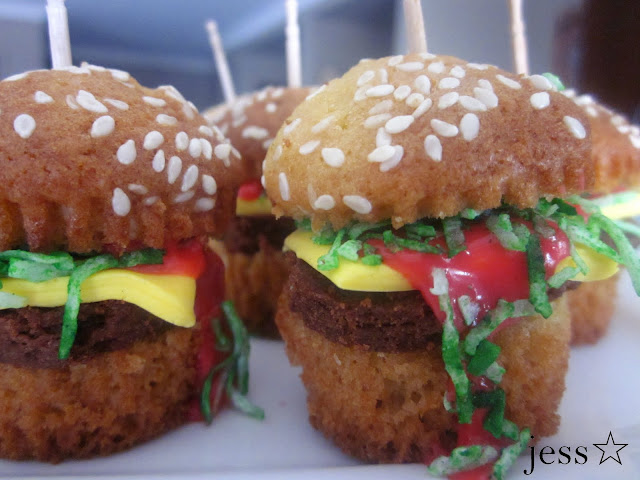 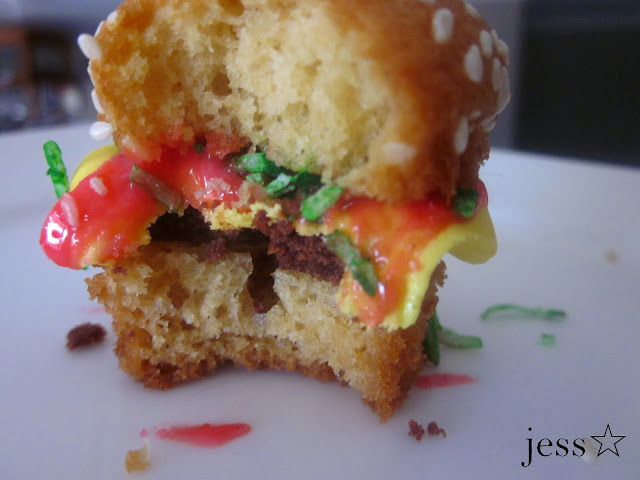 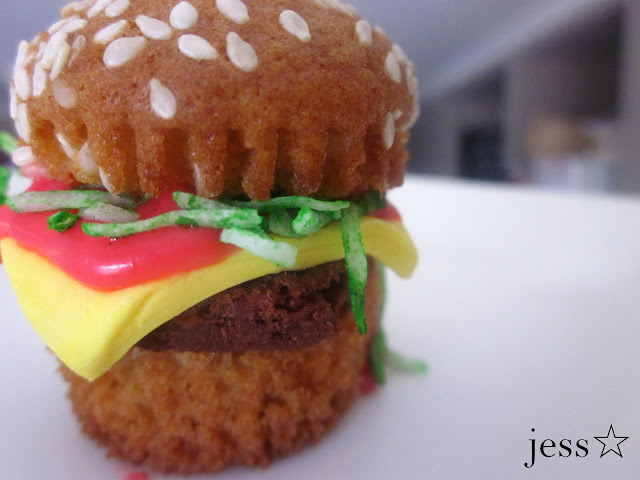 From a little picture on the internet to a delicious little reality, here are my hamburger cupcakes! Sous-Jeff is already voting for hotdogs next! How about you? Have you tried making something that tastes like something else completely?! 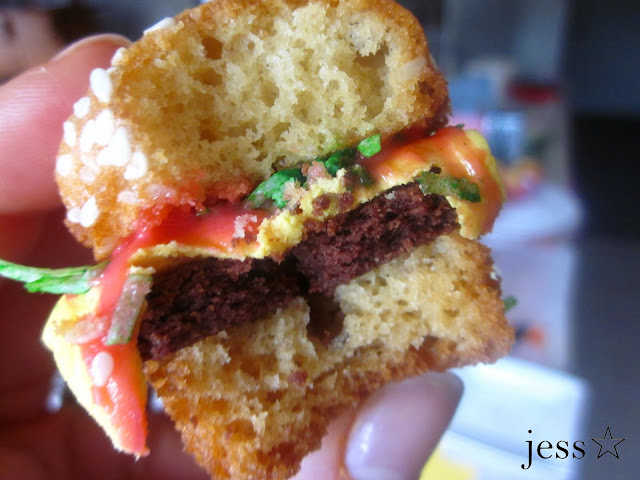