This blog has moved to http://multiculturalmelbourne.com/
Multicultural Cuisine of... Russia and Spain

"You ever been to that Spanish supermarket place on Johnson St?" Sous-Jeff asks me randomly one day. Huh? Sous-Jeff had been out having a drink with a friend of ours, a vegetarian and big Mexican food lover, who told him about it. When Sous-Jeff arrived at his house for a quiet beer or 7, Mr. Vego was cooking up a chickpea and lentil curry, which captured Sous-Jeff's attention and senses. 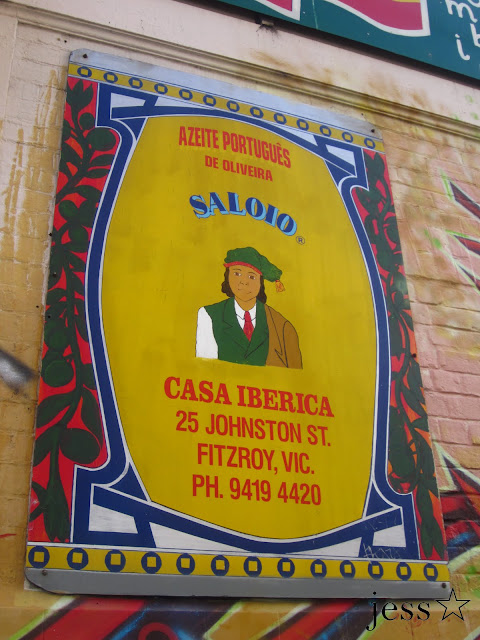 From what Sous-Jeff can tell me, there's some sort of supermarket on Johnson St that sells Mexican and Spanish groceries and food - things like black beans, chorizo and the like. With no other information to go from, I investigate further and discover the boys are talking about Casa Iberica. In that case, yes, I have heard of it, but no, I've never actually been before. With Sous-Jeff having a day off work on the same day as my day off, the planets aligned, and off we go to do some shopping!
With plenty of time to kill and tummies already grumbling, we decide it's lunch time, and to just wonder into the next place we walk past. That place is Cafe Umago, at 171 Brunswick St. In we walk, and none of the wait staff seem to have noticed us. So we sit down and help ourselves to a few menus. 15 (yes, FIFTEEN) minutes later, we haven't received so much as a side glance from either of the two waiters roaming the bar area of the cafe. One of them has walked past us twice while clearing another table, but still hasn't bothered to so much as make eye contact with us. 20 minutes after walking in to Cafe Umago, we walk out, very disappointed, and absolutely starving.
Not wanting to be disappointed any further, we stroll on into Naked for Satan, where we know we can't be let down. It was around about 1:45pm on a Friday afternoon, and it was still fairly busy. Drinks in hand, we grab a plate each, fill up, and crash on a couch, devouring our food as if we hadn't been fed in a week.
It's a beautiful day, so we decide to leave the car and just wonder around on foot, which as a great option, as we came across this: 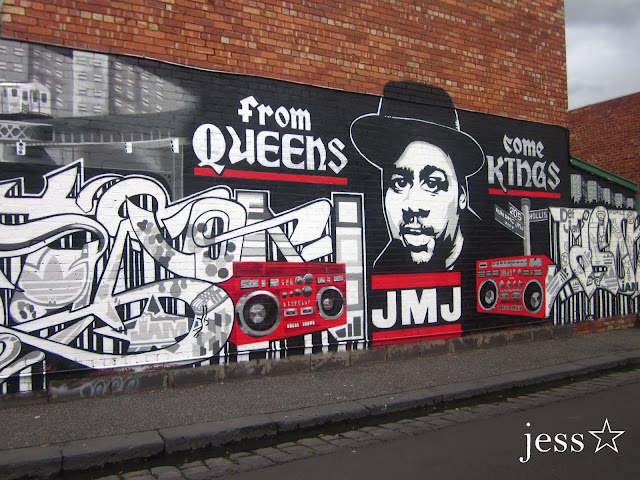 Awesome! But anyway, we were still a little peckish, so I suggest a stop into Babka Bakery for a little dessert action...
Babka Bakery Cafe
358 Brunswick St,
Fitzroy
(03) 9416 0091 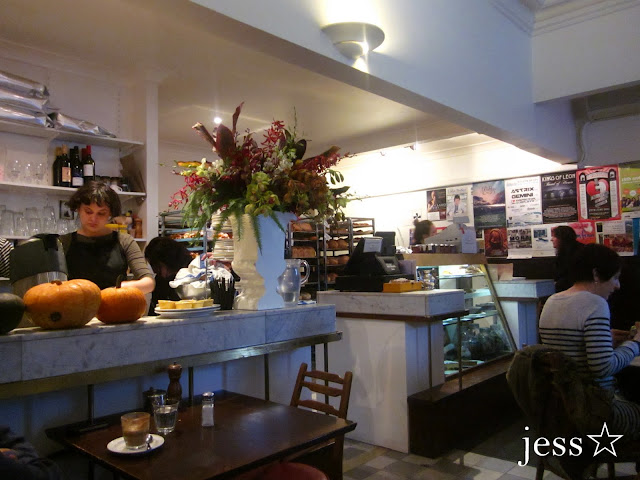 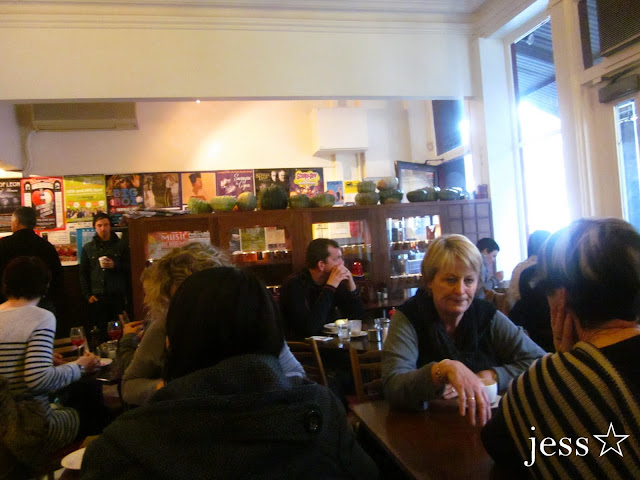 A cosy little cafe, it is absolutely packed with people. Some are eating eggs on toast, some are eating lunch, and others, like us, are enjoying something sweet with a tea or coffee. From the moment we walked in until the moment we left, there was a line from the counter to the front door, people wandering in and out to either have a sit down feed, or to grab some bread to take with them on their way. I wanted to try everything, but Sous-Jeff and I decide to be good and share, so I'm sent to the counter with his wallet to order. Mistake. We decided on a small piece of Chocolate Mudcake. I may have gotten a slightly bigger piece. And a cookie. Oops. 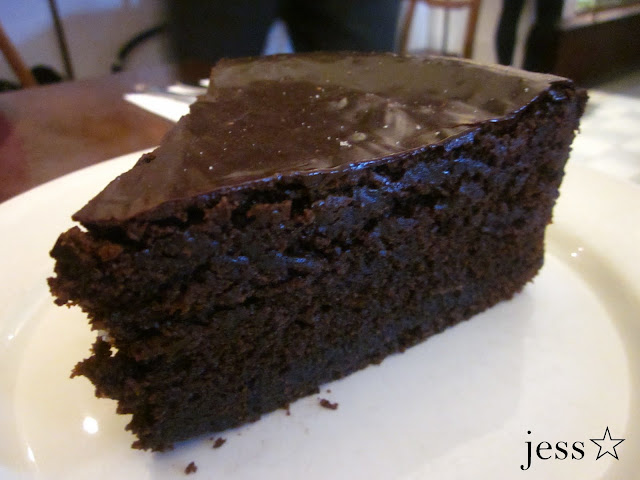 Thick, moist, chocolatey and delicious. It was a darn good chocolate cake, although I think it would have been even better warmed up. 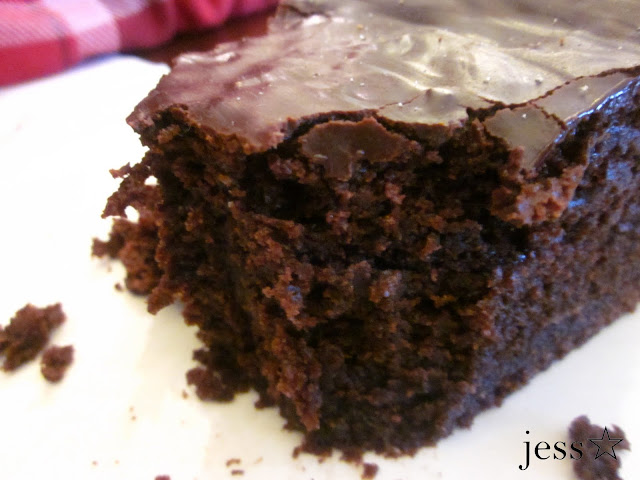 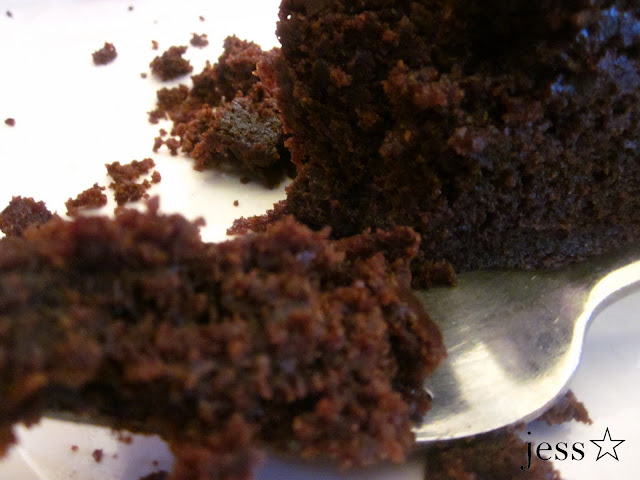 I also grabbed a lemon coconut and poppy seed biscuit. I'm stared down by Sous-Jeff who's trying to make me feel guilty. "I couldn't just leave it there, it was looking at me, look how nice it looks!" I protest, weakly. 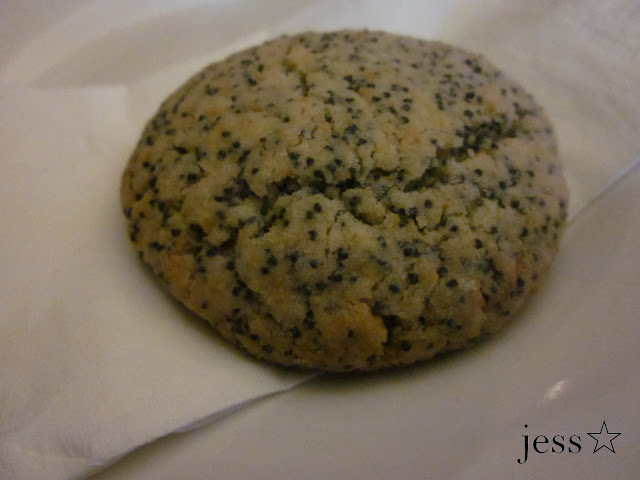 I was expecting a nice, soft, chewy biscuit. I got a very hard one. I was very surprised, but pleasantly so. It was absolutely delicious, and I think I may have even enjoyed it more than the chocolate (which is very unusual for me!) - the combination of the citrus and coconut was beautiful, and I really enjoyed the crunch of the cookie. Luckily for me, Sous-Jeff wasn't a fan, so I didn't have to share! 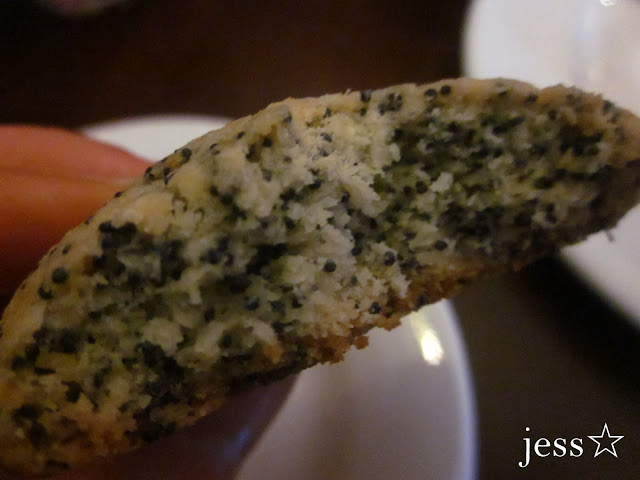 All of that said though, I wasn't as impressed as I should have been after having visited this Fitzroy institution. My reasoning behind this is that they are known more for their bread and pastry than their cakes and cookies. But I wasn't really feeling like a loaf of bread to nibble on for dessert! Therefore, my rating is based solely on THIS visit.

Tummies fed, it's time to get to our final stop - Casa Iberica. Footing it again, we see some more awesome street art, which we love even more because we're both huuuuge basketball fans: 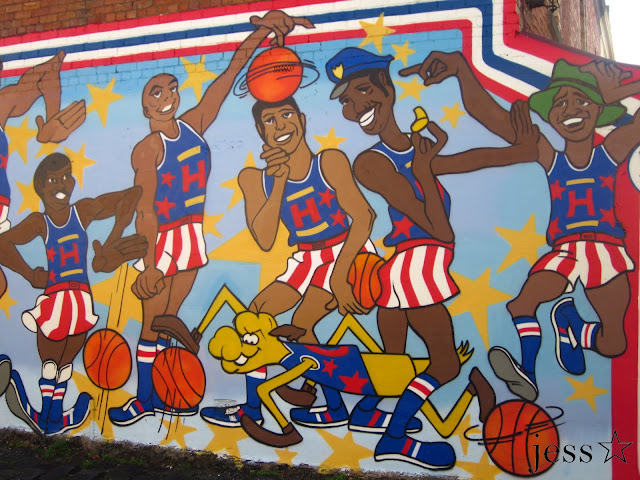 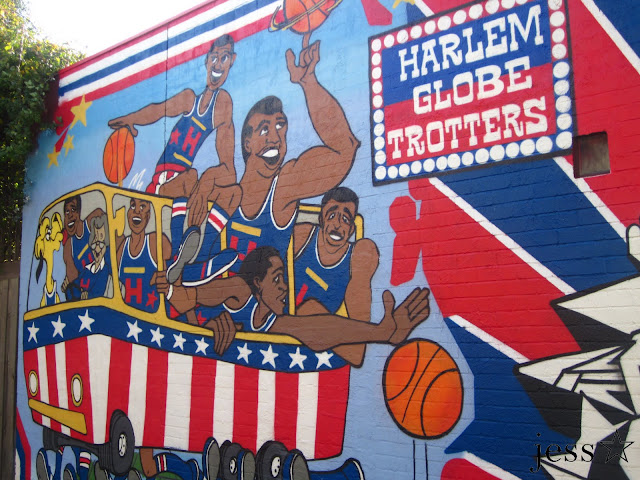 (03) 9419 4430
Visit Website
Ahhh here we are! Finally! We walk into a treasure trove of imported goodies. Here's some of the amazing products we found... 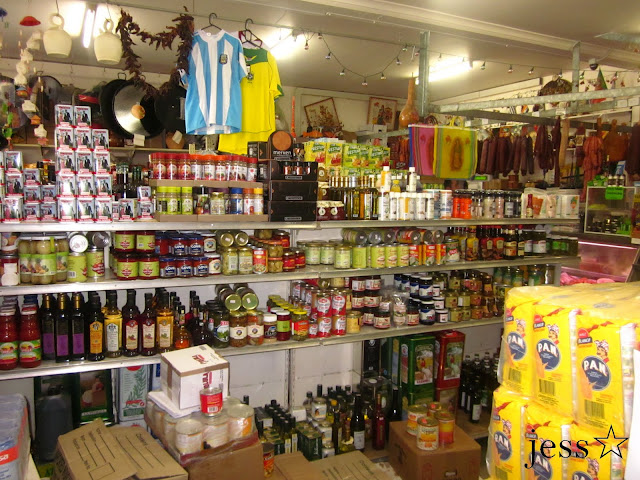 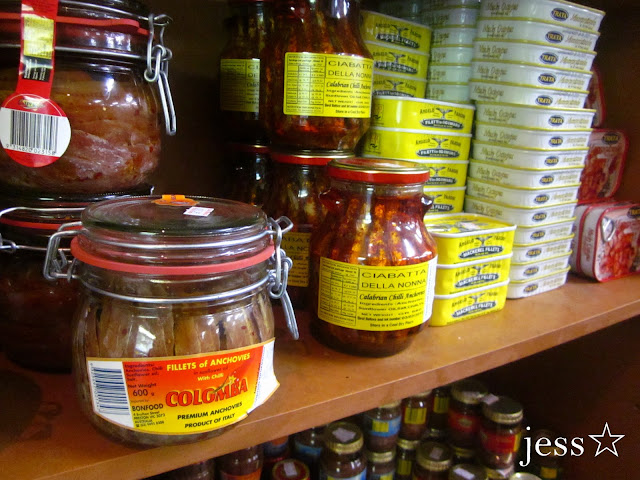 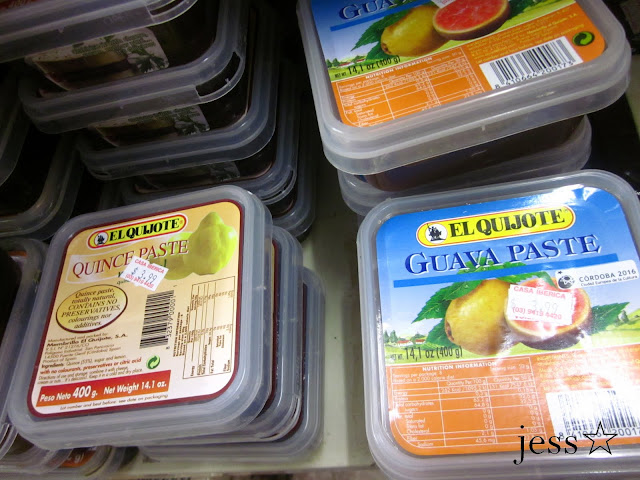 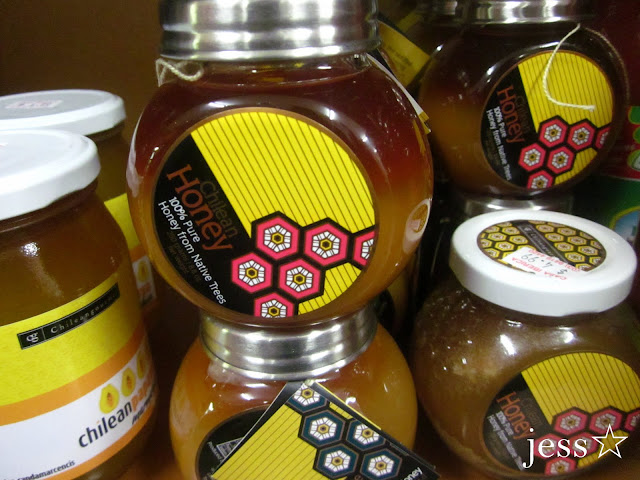 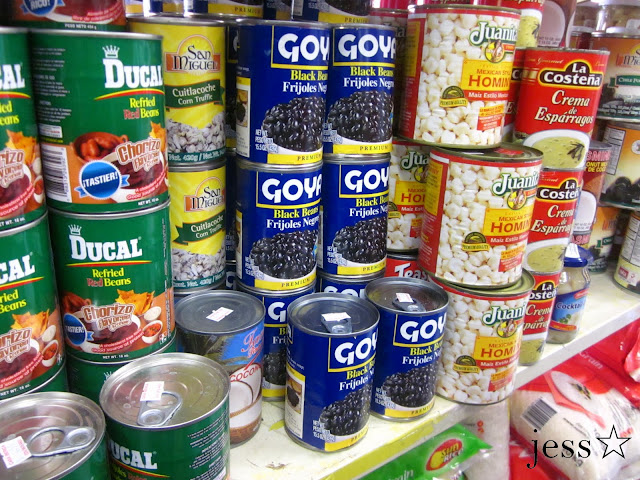 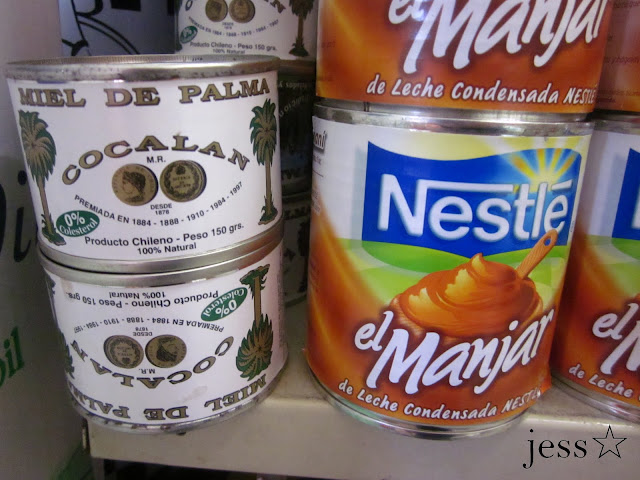 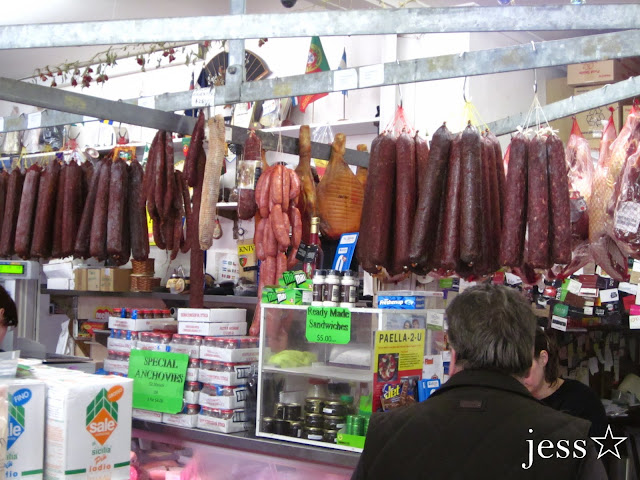 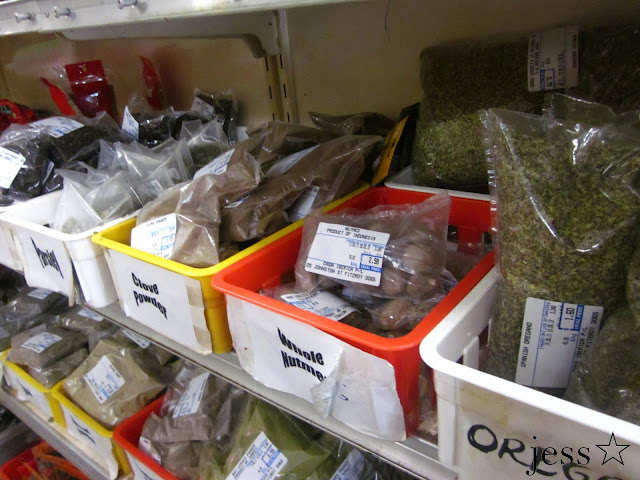 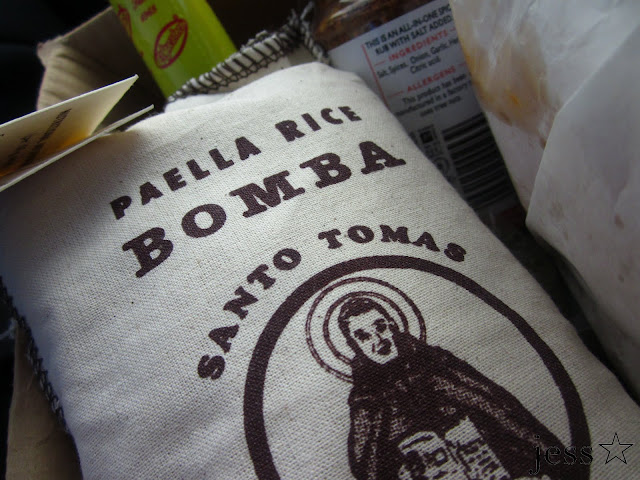 Everything from paella rice (above) to chilli sauces (about 300 different types - Sous-Jeff bought about 4 of them), and everything in between. We came home with the above mentioned chilli sauces, quite a few bags of dried herbs, paella rice, black beans and refried beans, chickpea flour, and a nice, fresh, chorizo empanada. Unfortunately, it didn't quite make it to get photographed - it was sooooo tasty, and I'd highly recommend picking one up if you make a trip to Casa Iberica! 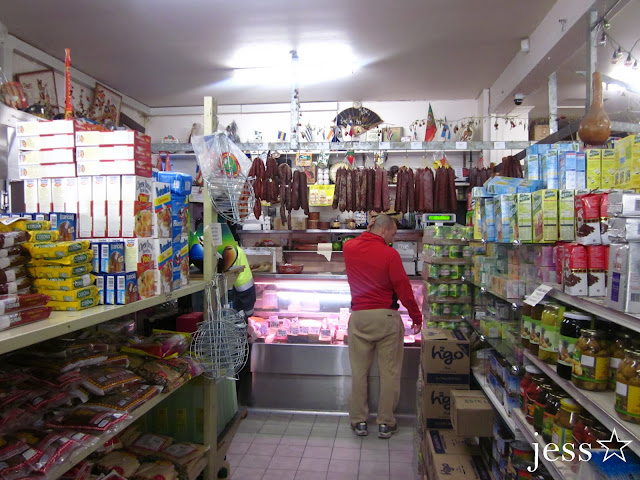 Needless to say, I made an absolutely killer paella for dinner after this trip, and I plan on heading back next week to pick up some more supplies, including some good, thick choriza, jamon ham and some of those little clay dishes that you see huervos rancheros baked in. I feel like getting my Spanish cooking on now - I'm inspired!