This blog has moved to http://multiculturalmelbourne.com/
Multicultural Cuisine of... Modern Australian

In the spirit of trying new things to get my blog up and running, I've convinced by partner in food, life and crime to come out for dinner on this absolutely freezing cold Melbourne evening.
Before starting this review, let me introduce the man who will be by my side for most of my culinary adventures. My lovely husband, who'll try just about anything once, will be referred to throughout my blogging as Sous-Jeff. His name is not Jeff, so this isn't a clever play on words. This is his self-bestowed nickname for all of our foodie escapades.
It all started around 18 months ago. Confined to the couch post-hip surgery, an Iron Chef marathon was playing on the Food channel, which I watched quite intently for a few hours on this one day, completely losing track of time as I took in all of the new ideas. Hubby came home from work and asked how my day was; I pointed to the TV, and explained the show to him. He was intrigued, and sat down next to me to watch. Alton Brown was making comment on what the Iron Chef's sous chef was preparing, and Hubby asked, naively enough, why they kept calling him "Jeff," and why both chef's helpers were called Jeff. And who the hell was "Sue?!"
The Kitchen Bug shifted awkwardly on my lap, as though he knew the answer to those questions, and was embarrased at his dad's lack of food knowledge. I went on to clarify everyone's names and roles, and was met with an "Ohhhhhhhh, I get it now!"
A few weeks later, back on my feet, I was making dinner. I asked him to pass me an ingredient, as I was running out of hands, and he christened him self my "Sous-Jeff." From that day onwards, every time I ask him to pass me a wooden spoon or grab something out of the fridge, I'm met with a very official "yes, chef!" While not an epicurian expert, Sous-Jeff will try almost anything once, making him the perfect food companion for me. He is also quite the beer connoisseur (having already tried almost every beer once), and will provide lots of invaluable "drink this beer with this meal" information for the boys!
Aaannyway, back to dinner! Unfortunately for us, we spent an hour and three quarters in the car trying to get to Yeyo, courtesy of the miserable, rainy weather, footy traffic (Collingwood vs Geelong), and fallen power lines. We finally arrived, running rather late and jumped out of the car to be slapped in the face with icy-cold air. "If this food isn't absolutely amazing, we're going to get ice-cream on the way home!" I scream into the wind.
So why did we decide to go there? We received a dinner voucher to use - entitling us to an entree tasting plate, 2 main meals, a dessert tasting plate, and 2 cocktails! Neither of us had heard much of the restaurant, other than the cocktails were apparently fantastic, and that was good enough for us!
Upon entering the restaurant, we were welcomed by the not-so-dulcet tones of a mob of inebriated footy supporters belting out a version of "Living on a Prayer." The venue looked lovely, but that was a little off-putting... thankfully, they only lasted another half a song before stumbling out the front door and heading elsewhere. 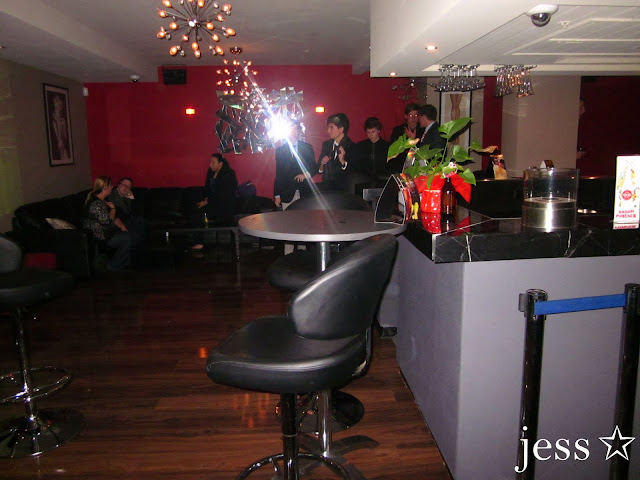 The atmosphere post-karaoke was very laid-back cool. The clientele were mostly hip, younger couples, and a few older couples. The wait staff were very commendable; attentive, friendly and helpful, giving us no less attention just because we were there on an already-paid-for dinner. Our waitress ensured our entree tasting platter was brought out to us very promptly, followed quickly by our cocktails (Sous-Jeff had a very strong Caprioska, while I had a very girly Strawberry Bliss - strawberry and melon vodka flavours).
The pita bread was lovely, but not nearly enough (only three pieces). The marinated olives and char-grilled capsicum were fairly standard - tasty and a little on the oily side, but nothing spectacular. The grilled Saganaki was delicious, but a too small a serve for two people. Neither of us are really salmon eaters; I did try it, but I don't really have anything to compare it to! The chorizo and chevapi were really delicious, but I'd have to say the hero of the tasting plate was the dip - it was sooo smooth and creamy, with a really sweet flavour. Amazing with the pita bread!
Next out were our mains. Poor Sous-Jeff sat there feeling rather emasculated when my Chicken Parmigiana hit the table, along with his Lemon Rosemary Marinated Chicken... So we compromised, and ate half and half of each dish! 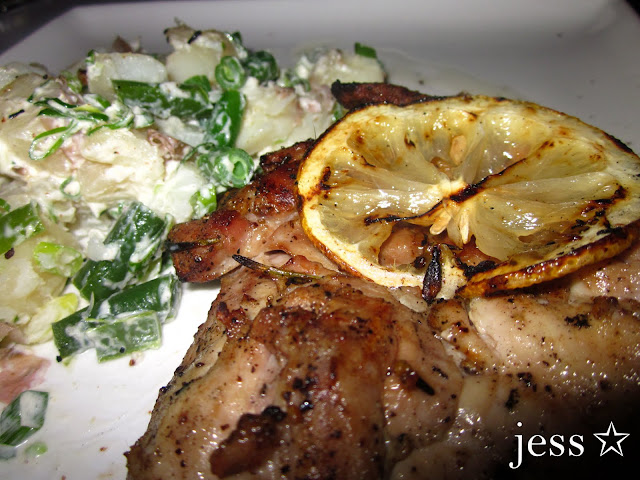 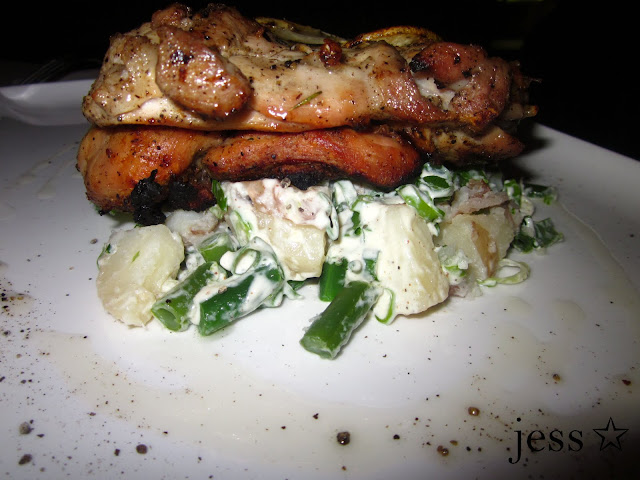 Sous-Jeff was disappointed - not only did his meal look kind of wimpy, it was chicken thigh, not breast. Upon trying my half of the meal, I found the chicken to be very over-cooked and charcoaled, with very little lemon or rosemary flavour. The potato and bean salad on the other hand was delicious. 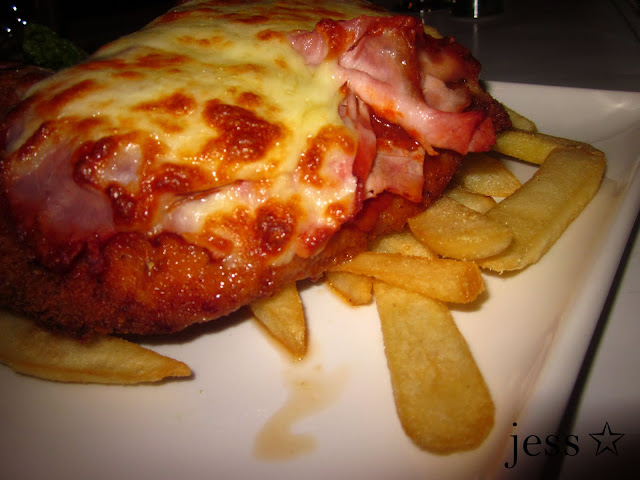 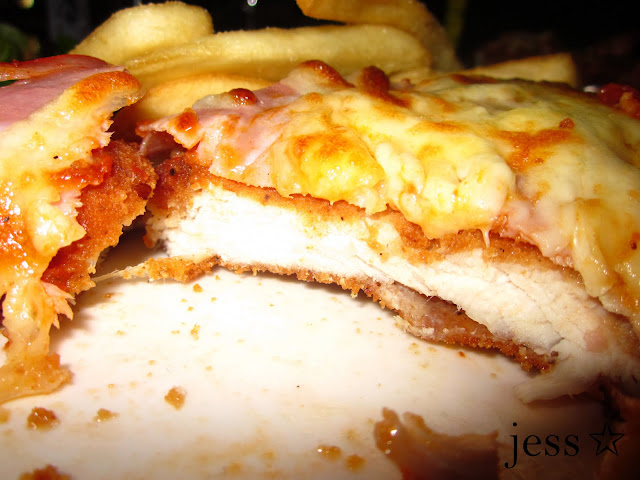 In stark contrast to the beautifully plated marinated chicken, out comes my big, hearty parma. And it is darn good. Chips are magnificent - kept their crunch despite the parma being placed on top of them (was quickly moved to the other side of the plate!), and the schnitzel kept its crispiness for the most part under the ham, sauce and cheese. Sous-Jeff would like it noted that the highlight of the meal was the chicken salt used on the chips - WOW!

After a quick digestion break, out came dessert - a creme brulee and a melted chocolate and strawberry French-style crepe. Unfortunately, in my excitement over the chocolate, I completely forgot about the camera sitting next to me... 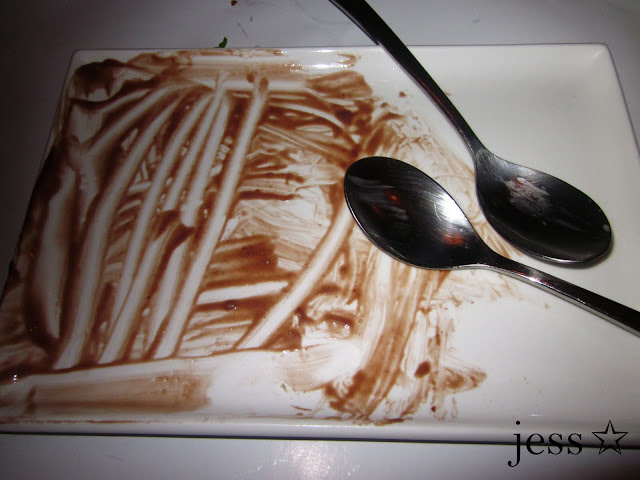 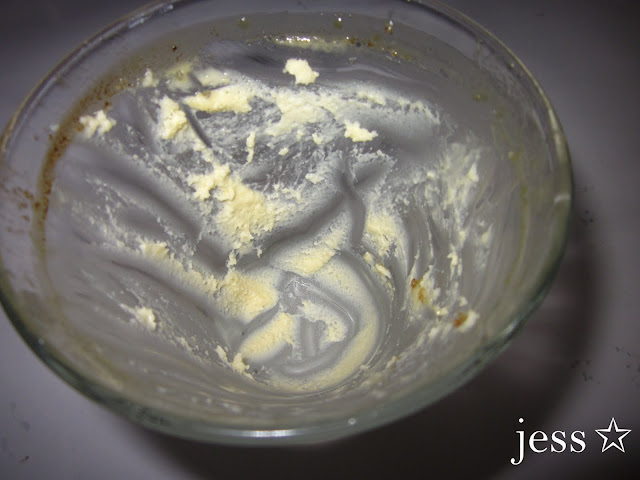 But you can see by the clean plates that they were realllyyyy yummmyyyy!!!


Overall, was a great dining experience. Don't be fooled by the out-of-place flat screens showing MTV film clips and the footy, or the paper table clothes; the food was quite nice, and good value for money from the prices we saw on the menu we were given.
Would rate it a 6 out of 10.