I'm not the only foodie in this household - my lovely husband quite enjoys getting his food on too. One of his new favourite things to do is to get together with his boys club, and sample some of Melbourne's best chicken parma offerings. Each Wednesday night, the parma boys get together, one of them picks a location, and they all tag along to see what their parma has to offer. A few weeks ago, Sous-Jeff came home, singing the highest praises of that night's parma, devoured at the Standard Hotel in Fitzroy. Amazing, crunchy, tasty, thick, just really nice, he said. And ever since, he's been busting to take me there so that I too could appreciate the magnificence of this parma.

So this Friday night, before heading off to see the new Pirates of the Carribean movie, he suggests a parma dinner. Off to The Standard we went. 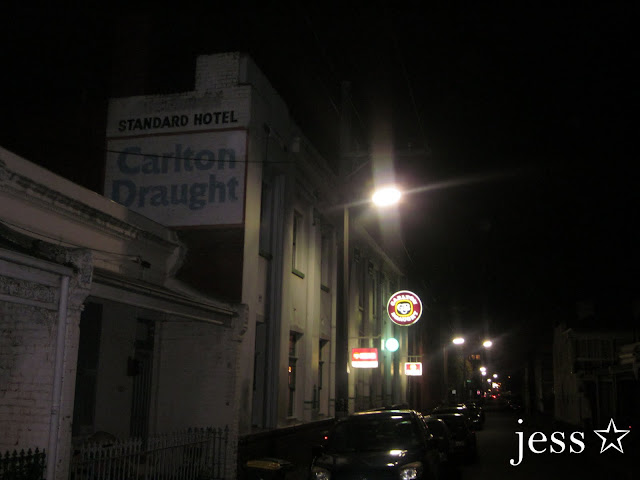 We park in a dark side street, and approach the pub. Doesn't look all that impressive, I comment. Sous-Jeff suggests I reserve my judgement until I step inside. 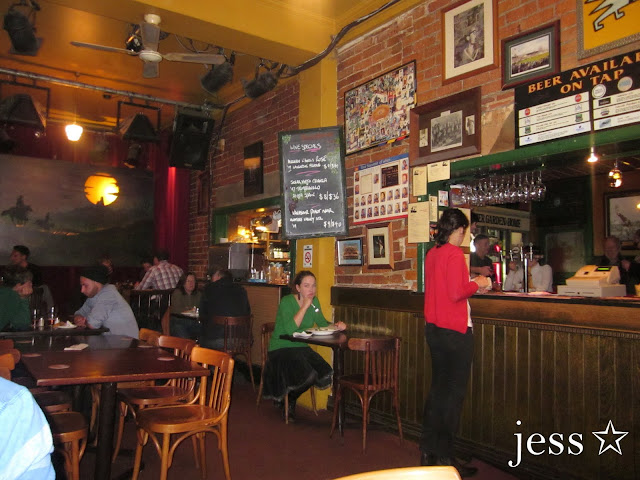 Inside I step, and much as I hate to admit it, Sous-Jeff is right - I love the place! I'm immediately hit by the smell of the fire place, one of my favourite smells, and am instantly feeling at home in this strange little pub. The lights are dimmed (apologies in advance for the sub-par photos!), and it's quintessential Brunswick St - the decor is an eclectic fusion of old Fitzroy football paraphernalia, vintage, Victorian-era photos, and randomly placed modern artwork. The other diners are a mix of locals, clad in fashionable double denim, beanies, dreadlocks, and super-colourful tights and cardigans, post-work drinkers in their suits and ties, and others like us, who've clearly heard they make a mean parma, as they seem to account for 2 in every 3 meals coming out of the kitchen.
I take a seat at a table set for 6 (almost all the tables are set for larger groups), and Sous-Jeff makes his way to the back of the line at the bar. This line was consistently lengthy from the time we walked in, to the time we left. I was told by Sous-Jeff that I didn't need a menu, as he was simply ordering 2 parmas. Entree? No, you won't need one. Can I look at the menu anyway? Sure, but I'm still ordering the parmas.
The entrees look sound delicious, including roasted chat potatoes, trio of dips, grilled saganaki and a cheese plate. Maybe next time. I continue reading, and discover that I'll be getting the "Chicken Parma Deluxe;" a crumbed chicken breast topped with prosciutto, napoli sauce, tasty cheese, and fetta. Interesting... I feel like a traditional parma, but Sous-Jeff claims this little touch makes it.
We've been seated for 5 minutes, and a waitress with a Beatles bowl hair cut, attired in a pleated mini skirt and skivvy, silently lays in front of us 2 plates with a large slice of bread. She smiles and continues on her way. The bread is thick, fresh, soft and fluffy. Now I'm even hungrier!
Thankfully, we only wait another 20 minutes until our parmas arrive. They're smaller than I expected, but Sous-Jeff assures me they're also quick thick, which is his mark of a decent parma. Unfortunately, they've been unceremoniously plonked on half the salad, which made the bottom of mine soggy. Other than the disappointing lack of crispyness, I couldn't fault it. 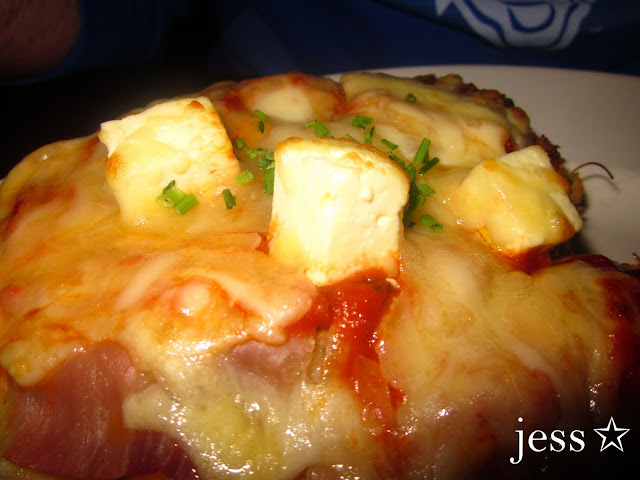 The prosciutto was deliciously salty, and the fetta was a really delicious touch. There wasn't a heap on there, just enough to inject some great extra flavour. Sous-Jeff's parma is a little thicker than mine - unfortunately, because of this, he found a nice little chunk of raw chicken in the thickest part of his parma. He was heartbroken - this little pub that he'd been raving on about had not only forgotten the crispiness on that parma, but they'd apparently forgotten to cook it all the way through as well. 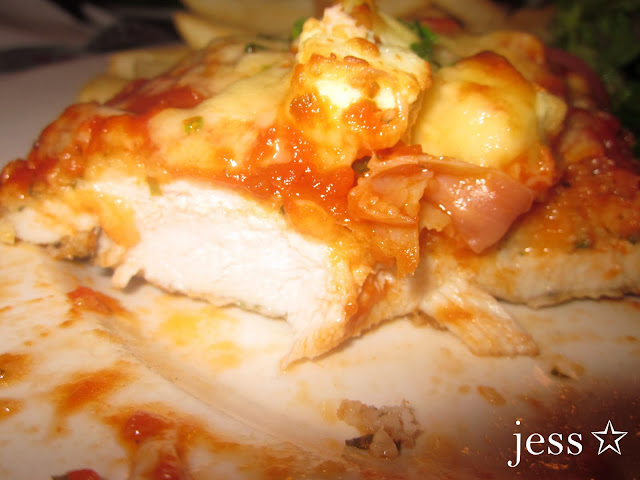 Mine, however, was perfectly cooked; just white on the inside, still nice and tender. Could have cooked a little longer, if for no other reason than to get the crispy breadcrumbs, but other than that, I genuinely can't find any faults; the taste was astonishingly good. The chips are important to me - I'm a big potato fan, and a good chip really enhances a good parma. They were magnificent - crispy on the outside, soft and fluffy on the inside, with the most incredible chicken salt. Unfortunately, half way through the meal, because of the lack of seating, we got some interesting locals pull up a seat at our table... we ate a little quicker, and left with a touch of indigestion, so wasn't as enjoyable an end to the meal as I'd have hoped.
Would rate it (parma) a 9 out of 10.

But, not to worry. Earlier in the day, a friend of mine sent me a text message, asking for my vote on a good place to go in the Templestowe area for dessert, coffee and cocktails. My vote was the upper level of Doncaster Shoppingtown - Groove Train's bar makes a pretty decent cocktail, but the real winner was Max Brenner for dessert. We were already heading to Doncaster for our movie, and since we were arriving a little earlier than expected, I suggested a visit to the Bald Man. Two souffles later, we were two very happy, very bloated diners. If you've never had the souffle at Max Brenners, shame on you. This is what you're missing. 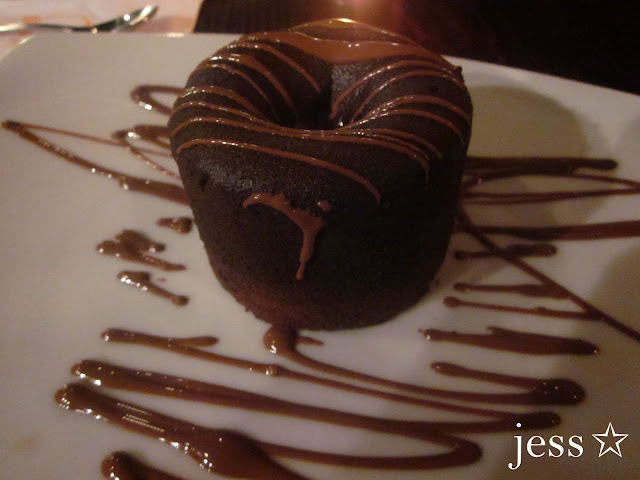 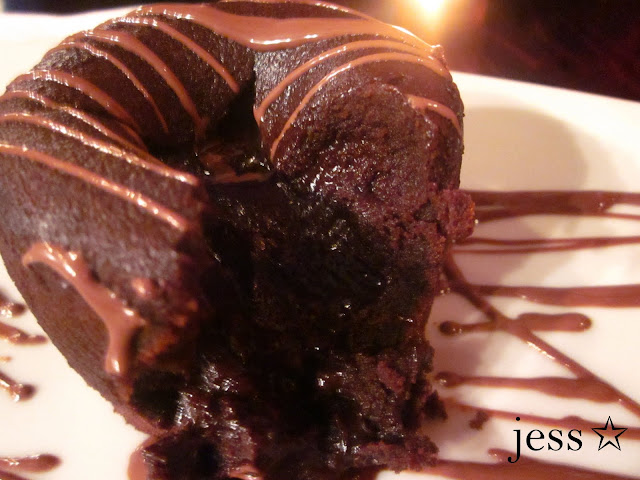 Drizzled in smooth milk chocolate, the cakey part is perfectly soft and fluffy, and then all of a sudden, this gooey chocolate comes pouring out. Just wow. I hope this recipe is in the cook book, I comment. Sous-Jeff looks at me quizically... Oh yeah, didn't I tell you? I ordered it from Amazon. Should arrive within the next couple of weeks. His eyes light up like a small child on Christmas morning, then they start to glaze over as he mentally begins compiling his dessert wish list...
Would rate it (Brenner in general) a 10 out of 10.
Posted by jess☆ at 2:17 am